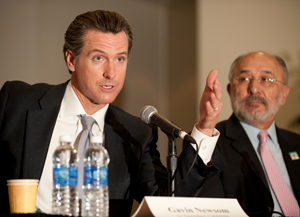 California, once the nation’s leader in research, innovation and economic development, has been on the skids, and Lt. Gov. Gavin Newsom says he knows a prime reason why: The defunding of higher education has crimped the pipeline of highly skilled workers.

The panel was virtually unanimous in its assessment that both the challenges and opportunities for collaboration between business and higher education are significant.

“You can’t have an economic development strategy without a workforce development strategy,” Newsom said, pointing out that California employers cannot fill half a million open jobs because of a shortage of highly skilled workers. “The last great transformation, at the end of World War II, was led by the business community. It’s a completely new world we’re living in today, and it requires a revolution in the way we develop talent.”

Engineering Dean Mahyar Amouzegar agreed, and he said he is looking to partner with companies to ensure that the pipeline of talented graduates grows.

“We cannot keep looking solely to taxpayers who are not interested in subsidizing education,” Amouzegar said. “Companies need to invest. They have received wonderful students from the CSU, so they need to share in that investment.” 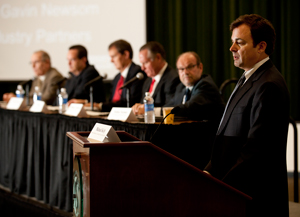 Boeing has long invested in higher education and reaped the benefits. Beith said Cal Poly Pomona is one of the best universities at helping students develop the skills they need to meet the demands of evolving workplaces. He recounted “The Boeing Six” – a group of cyber security students who were hired as a team after graduation in 2009.

CIS Professor Dan Manson, who sat on the panel, said Cal Poly Pomona is well positioned to meet the workforce development challenges because of its learn-by-doing approach to education. He cited the strides his department has made to prepare the next generation of cyber security professionals, including the cultivation of a cyber security team for regional and national competitions, the establishment of the National Cyber League, and the significant role it plays in the Cyber Patriot program, which grooms high school students with a budding interest in the cyber world. Still, he said, much more needs to be done.

“We need to form an Olympics training center for cyber,” he said, pointing out that it is a national security issue. “China’s People’s Liberation Army has 30,000 highly skilled cyber experts, and its militia has 100,000. The United States has about a thousand.”

Joel Benkie, a longtime supporter of the university, said he remains an optimist in the state’s ability to reinvent itself – in part because his company, Ducommun, has evolved several times since its inception during the Gold Rush of 1849. The Carson-based provider of engineering and manufacturing services is, in fact, the oldest company in the state.

“We’re very much a believer in California,” he said. “The key is innovation. … We have to always be one step ahead to stay competitive.” He agreed with others on the panel that Cal Poly Pomona can and should be a significant partner in driving economic development in California.

“A large number of people really care about this school,” he said. “The challenge for the university is to create the framework that gets the best out of its [business partners].”