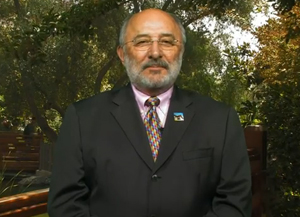 President Ortiz shares news of the CSU Board of Trustees naming Tim White as the next chancellor to lead the system. White has grown up in California public universities, from community college to CSU to the UC system.

“Tim embodies many of our values. He is a teacher-scholar, values diversity, and embraces the importance of environmental issues,” Ortiz says in his Monday video message. “He is known around the world for his work in muscle plasticity, injury, and aging,”

The president’s weekly video highlights the new Veterans Resource Center, which will serve veteran students and veteran-dependent students. The center is supported by a grant form the Kellogg Legacy Project Endowment. iPoly high school also celebrated the grand opening of its new facility. The high school is in partnership with the College Education & Integrative Studies and the Los Angeles County Office of Education.

The campus community is encouraged to attend fall community events that have become beloved traditions on campus. Matt’s Run will be Saturday, Oct. 13 at 8 a.m., and the online registration deadline is Friday at noon.

The Pumpkin Festival, celebrating its 20th anniversary, will be held Oct. 20 & 21. The festival has grown into a major regional event that draws tens of thousands of visitors. The Insect Fair and Preview Day for prospective students will be on the same weekend.

The president concludes his campus update with an invitation to the Provost’s Awards for Excellence Symposium on Oct. 25, which will honor professors Jill Adler-Moore, Faye Wachs and Ed Walton.