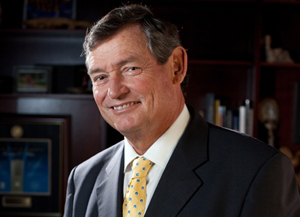 The California State University Board of Trustees today named Timothy P. White, chancellor of UC Riverside, as the seventh chancellor to lead the 23 campus CSU system, the largest four-year public higher education system in the country.

“I am humbled to have been chosen to lead the California State University system at such a transformative time,” White said. “As Chancellor, I look forward to engaging with faculty, students, staff, campus presidents and CSU trustees, along with the communities we serve, as we advance this vital system of higher education for California’s future.”

White, 63, has served as UCR Chancellor since 2008 and was among the finalists for the position to succeed Chancellor Charles B. Reed who announced his retirement following a 14-year tenure with the system.

“Tim White’s background and experience reflect the institutional values and mission of the CSU,” said CSU Board Chair Bob Linscheid. “His demonstrated leadership and commitment to student success are the right combination for the university’s future.”

White is the eighth chancellor of UC Riverside and has led the growth of the campus to almost 21,000 students, a record for the campus that opened in 1954. Shortly after arriving at UCR, he formed a committee of faculty, staff, students and community stakeholders to develop a 10-year strategic plan for the university’s next stage of development. He also furthered UCR’s goal for the establishment of a School of Medicine by hiring its founding dean and securing $100 million in gifts and financing for the initial years of the school’s operation. The school this week received preliminary accreditation to serve students. In addition, he recently announced the opening of the UCR School of Public Policy.

Under White’s leadership, UCR has consistently been rated well in the U.S. News and World Report’s college rankings both in academic quality and diversity. Within the UC system, UCR has proportionally more minority students than any other campus, and more than 53 percent of UCR students receive Pell Grants.

“As a long serving member of the board, we are grateful to appoint a chancellor with Tim White’s commitment to reaching out to underserved students that was initiated by Chancellor Reed,” said CSU Trustee Bill Hauck who led the search committee. “Tim has experienced firsthand the powerful impact of higher education, and has the leadership qualities to guide the system through these fiscally challenging times.”

Prior to serving at UCR, White was president of the University of Idaho from 2004 to 2008. There he established a strategic direction to further the university’s role as the state’s land-grant and flagship research university.

White is a member of numerous national organizations, and is a Fellow of the American College of Sports Medicine. In addition, he has served on the NCAA Division I Board of Directors, the Western Association of Schools and Colleges, the American College and University Presidents Climate Commitment on Sustainability, the Big West Conference Board of Directors, and the University of California systemwide Working Smarter Initiative and Rebenching Committee.

Born in Buenos Aires, Argentina, White immigrated to Northern California, and is a first-generation college student who has matriculated within every college system in California. After beginning at Diablo Valley Community College, he earned a bachelor’s from Fresno State, a master’s degree from Cal State Hayward (East Bay), and a Ph.D. at UC Berkeley. He also spent two years as a post-doctoral scholar in physiology at the University of Michigan before starting his academic career in Ann Arbor. He is internationally recognized for his work in muscle plasticity, injury and aging.

White is expected to start in his new position at the end of December, and will receive an annual salary at the same level as the current chancellor, $421,500 plus a $30,000 supplement from CSU Foundation sources, as well as the standard benefits package for CSU employees.

White and his wife Dr. Karen White have four sons. She has been engaged with UC Riverside as a part-time assistant clinical professor for the Biomedical Sciences program, and as director of Operation Education, a scholarship program that supports veteran students with disabilities.