Ron Simons’ love of the university began as a student during the Eisenhower Administration. More than five decades later, after receiving an honorary doctorate in June, the man affectionately known as Mr. Cal Poly Pomona headed out — but not before telling a few stories.

Anyone who knows Simons knows that it is nearly impossible to walk away from a conversation with him and not learn something about the university, which has been a part of his DNA since he first set foot on campus as a freshman in 1959.

“The Rose Garden was built with seven radials because Mr. Kellogg was superstitious about the number seven.”

“A natural spring feeds the duck pond, which feeds the Japanese Gardens.”

“In the early days, when women were first admitted, they had to be in their dorm room by 10 on weekdays and midnight or 1 on weekends … and they had to sign out when they left.”

“There’s a story that Mr. Kellogg buried a time capsule at the Stables, but nothing was ever found.”

A few weeks before saying goodbye friends and colleagues – some of whom he has known for decades – Simons sat in his office and reminisced. The mementos that adorned his desk and walls, reflecting his passion for the rose float program, served as a fitting backdrop.

“If you talk long enough, you start to believe it yourself,” he says with his signature self-deprecating humor, downplaying his nearly iconic status on campus. Simons is affectionately known as Mr. Cal Poly Pomona, a title bestowed on him in the 1990s by Agnes Suzuki, the wife of then-President Bob Suzuki.

He has worn the honor well, not only because of his crisp memory for names, dates and university lore, or the fact that he has known all five university presidents and traversed every corner of the campus, but for a love of Cal Poly Pomona that he doesn’t try to disguise. 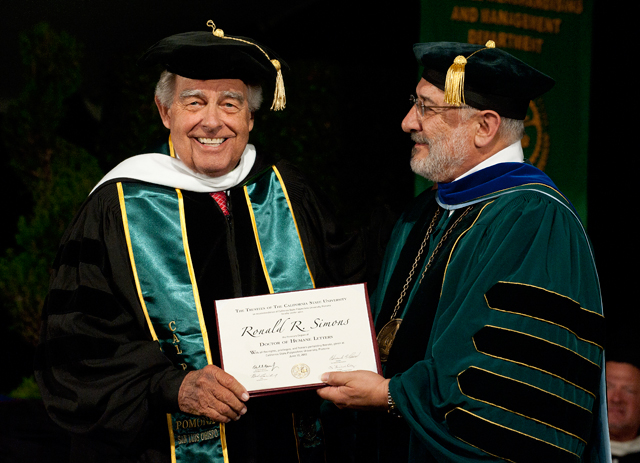 In June, he received recognition that humbled and left him speechless — at least briefly: an honorary doctorate recognizing his service to the university.

“I’m blown away,” he says. “When the president told me, he came in and gave me a proposal he wanted me to read for a funding project, and stuck in this proposal was this letter from the chancellor, saying congratulations. Initially, I thought it was for the person we were reaching out to, and I told the president, ‘That makes good sense.’ He just kept looking at me, and I read down and here’s my name. It was almost like going into shock. I’m so humbled to receive something like this. I don’t know how I can be worthy of it.”

And to think he almost didn’t come to Cal Poly Pomona.

His father, a farmer in the Imperial Valley, had planned to send him to a university in Northern California to study agriculture, but he changed his mind shortly before Simons graduated from high school.

“He’d heard about this place, Cal Poly, and thought it would be a better fit because it was less research oriented and more learn by doing,” Simons recalls. They agreed that he would stay just part of the year and then transfer.

The evening he arrived, while hanging out near his dorm on the Voorhis campus in San Dimas (forerunner to Cal Poly Pomona and the place where students lived), Simons had a life changing conversation.

“A roommate named Jack Dragovich came up to me and said, ‘I’m going over to the main campus to attend a meeting on building Cal Poly’s rose float. Would you like to come along?’ I went and agreed to join in. Here we were, building something that was going to be seen by people around the world. … I’ll be honest, I was excited. I got hooked, and, as they say, the rest is history.”

The rose float lab isn’t much to look at: a hodgepodge of machinery, parts and detritus from previous floats on a large concrete slab next to an old corrugated building on the eastern fringe of campus. Dust storms blow through in the fall, and on winter nights the cold can numb your hands. It is Simons’ home away from home.

He speaks almost reverently of the floats he helped build and the innovations that earned the two Cal Polys a reputation as leaders in animation and creativity. If you check out the 1962 float, “Man on the Moon,” in the university archives, you will see a young Simons dressed as an astronaut. He waves to the crowd along the parade route before ducking into a sphere that begins to spin in the lap of a crescent moon. It was a design he perfected to ensure he wouldn’t get dizzy along the parade route.

Of course, life on campus in the early 1960s wasn’t just rose floats. There was the caiman named Snappy, the bottle of hooch that blew up in his dorm room in the middle of the night, the student’s car that mysteriously wound up in the pond, the friend who woke up in his bed on the roof of the dorm … and so much more.

Simons points to a patch of grass west of the Alamitos residence hall. “Someday, when they do an excavation, they’re going to find my pet alligator. After Snappy died, we had a midnight ceremony — pall bearers, candlelight — and we buried him here.”

Alamitos is one of four original student residence halls on campus, and Simons is the original student resident, having moved in a week before classes started in 1960. “They wanted to have, as they said, ‘a male presence’ when the house mothers arrived a week before school started” for their safety, and Simons was the logical choice because he had worked on campus that summer.

A few months before the 300 coeds arrived, Cal Poly President Julian McPhee sent out a memo that Simons says went something like this: “’We’re going to have young ladies coming in next year. We’d like to see you clean your act a little bit. No running around in short pants with no shoes or shirts. Maybe check your language. … And now for you students, I’d like to see the same out of you.’

He fondly recalls the names of the men who inspired and encouraged him and his classmates.

“A lot of us weren’t, shall I say, headed to being Rhodes Scholars. We’d come off of working ranches and farms, but they knew we had the capacity to learn, and they helped us work it out. We were really blessed to have some great professors.”

Simons enlisted in the Army and entered Officer Candidate School after graduating in 1964, serving three years before returning to campus for a second degree. What he encountered was a very different Cal Poly Pomona. Hair had gotten longer. The music had evolved. Attitudes and roles had changed.

“There were demonstrations at the flagpole in front of the administration building. I’d been in the military, so I had to learn to adjust to this. It hit me pretty hard.”

He turned to an old friend, the rose float program. The dean of students had asked him to take over because the chair had become academically ineligible just three months before the parade.

“I said great, I’d love the challenge. What’s the design?” There was no design.

“I said OK … let’s call the committee together and get on this right away.” There was no committee.

“I said OK, how much money did we get budgeted?” There was no budget.

The 1968 float, “The Mouse That Got Away,” won the Princess Award for its breakthrough animation.

“I remember the thrill that New Year’s morning of seeing that banner go in front of the float. It was actually one of the highlights of my life.”

But not quite the highlight. At the post-parade dinner, an attractive young woman, the guest of a student body officer, caught his eye.

“It took me about a year to convince Judy that she needed to start going out with me, and it was another year and a half later that we were married. We’re classified a rose float marriage — people who met, dated and got to know each other as a result of the rose float experience. We have a number of them in our record book of alums.”

At the same meal, University President Robert Kramer told Simons he had a job waiting for him when he graduated. A year later, when a marketing opportunity in Salinas fizzled, Simons went to see Kramer.

“Do you remember when you said to see you if I ever wanted to work at Cal Poly? He said absolutely. And then he said, ‘What do you want to do?’”

Simons asked to form an office of alumni affairs. “His words to me were “Go start one.”

It was like déjà vu from my rose float days. There was no budget, no space, no staff, just the charge, “Go start one.’”

He did, setting up an office in a former storage closet that was so small, meetings had to be held in the hallway. He charmed secretaries to type papers and take on projects, and he started compiling piles of cards and notes about alumni. Those humble beginnings grew into what today is known as University Advancement, with dozens of staff and the responsibility of raising millions of dollars a year.

Simons looks back on his long career, almost amazed at his good fortune and all the friends he’s made along the way.

“It was the right time and right place for a lot of things for me. I officially retired a few years ago but they hired me back as a retired annuitant. Nobody’s really sure what I do. … It’s how I’ve lasted as long as I have.”