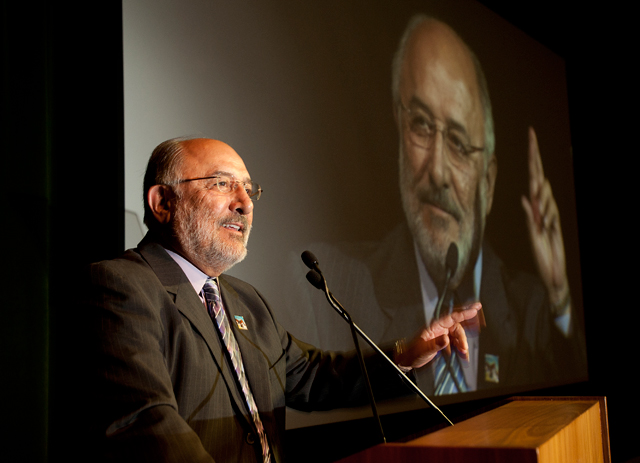 The outcome of Proposition 30 will have a huge impact on the CSU and Cal Poly Pomona, President Ortiz said Wednesday at Fall Conference. If passed, it would be a “huge win” for current and future students, but its defeat result in an additional $250 million cut overall to the CSU and about $12 million specifically for Cal Poly Pomona.

“Today is a call to action. We need everyone, and I mean everyone, to understand the impact of this measure and to vote accordingly,” Ortiz said in his speech to a full house of faculty and staff in the Bronco Student Center. “Anybody who cares about the future of education in California – from K-12 to the community colleges to our four-year public universities – everyone needs to look closely at Proposition 30 and its impact on the state.”

If voters reject the initiative on Nov. 6, the CSU faces some hard outcomes, including a 5 percent midyear tuition increase.

But despite some recent dire predictions from the CSU Chancellor’s Office, Ortiz offered a tempered view of Cal Poly Pomona’s budget situation.

“For many years, we have been extremely prudent with our spending. Each of you has shouldered the load while we limited new hires. Our procurement spending is way down. And, of course, we have not received any compensation increase for over five years,” Ortiz said. “The result is that we are prepared for any reasonable scenario.”

The president offered an upbeat assessment about a different financial matter: the comprehensive campaign, which has raised $106 million. Notable gifts include a $1.5 million bequest from biological sciences Professor Emeritus Peter Castro and an endowed scholarship honoring former Professor George Schmitz, plant and social sciences, who died in 2008.

Ortiz again emphasized the university’s highest priority, the Graduation Initiative. New tools such as the Student Success Dashboard and myBAR will help faculty and staff identify patterns of performance and evaluate students’ on-campus engagement. This year, a new Early Alert System will help identify and contact students who are at risk academically.

“I want to be clear that our goal is not merely to move students quickly to graduation, but to ensure student learning and success. I am pleased to say that the steps we have taken are bearing fruit,” Ortiz said.

During his speech, Ortiz recognized Maureen Burton, economics professor, as the winner of this year’s George P. Hart Award, which honors a faculty member for being a role model and leader on campus and in the community. Burton, who has taught at Cal Poly Pomona for 25 years, has served in many roles, including department chair, graduate coordinator, Academic Senator and faculty co-chair of the first University Budget Committee.

“She also champions justice and welcomes challenges, having taught a wide range of graduate and undergraduate economics classes. Female and underrepresented students have found her to be an advocate, and she has devoted an extraordinary amount of time as a mentor for junior faculty,” Ortiz said.

Convocation celebrated the winners of the Provost’s Award for Excellence, Outstanding Advisors, Outstanding Staff, and faculty members receiving tenure and/or promotion. The president’s State of the University speech highlighted many achievements by faculty, staff and students from the past year.

To read the entire Convocation address, download a PDF of the transcript.