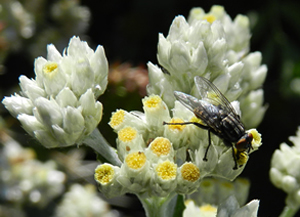 Cal Poly Pomona is well-known as a “green” campus, but few people know that it is one of the most biologically diverse campuses in the CSU. Hundreds of plant and animal species are found on the agricultural pastures, the Voorhis Ecological Reserve, and the Spadra Landfill region, which now houses the Lyle Center for Regenerative Studies.

Faculty and students from the biological sciences department have documented this diversity for decades, and their studies are showcased in a new biodiversity website, www.cpp.edu/biodiversity/.

The site describes the four different ecological communities found on campus (coastal sage scrub, walnut woodland, oak woodland, and riparian woodland). These natural areas are home to at least 100 species of birds, 39 species of mammals, 20 species of reptiles and amphibians, 261 species of plants, and more species of insects and other arthropods than anyone has ever taken the time to identify and count.

The biodiversity website also explores the factors that impact biodiversity at Cal Poly Pomona, including obvious threats such as development and lesser-known factors such as invasive species. Because biodiversity is dynamic, the information is continually updated and will allow future biologists to look at changes over time.

“Biodiversity begins at home,” says Curtis Clark, the biological sciences professor who coordinated the site. “People have studied our campus for decades, and yet it’s so easy not only to lose sight of the work but even to lose the work itself. When I was an assistant professor back in the 1980s, I remember seeing a list from the 1970s of plants collected on campus. That list, and all its knowledge, has been lost.”

By making the information widely available, faculty hope to prevent losing that knowledge in the future.