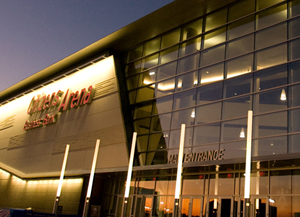 Although the site selection will technically provide a truly neutral site for the first time in tournament history, Cal Poly Pomona fans will be hoping for the opportunity to turn it into a homecourt atmosphere in favor of the Broncos. Previous sites include campus gyms at Cal State San Bernardino, Humboldt State, Cal State East Bay and UC San Diego. The CPP campus is 17 miles from Citizens Business Bank Arena.

The tournament will begin play at campus sites on Tuesday, March 5, before the semifinals and finals at Citizens Business Bank Arena on Friday, March 8, and Saturday, March 9.

“We are very pleased to announce that the CCAA has partnered with the City of Ontario, Citizens Business Bank Arena, and AEG Facilities to hold its 2012-13 CCAA Men’s and Women’s Basketball Championship Tournament Semifinals and Finals at Citizens Business Bank Arena,” Commissioner Robert J. Hiegert said. “Our student-athletes will have the opportunity to showcase their talents in an outstanding facility that will provide a truly neutral site for the first time in the tournament’s history.”

In the five-year history of the CCAA Basketball Championships, the Broncos’ men’s basketball program has reached at least the semifinal stage in all five seasons. The CPP women’s basketball team has advanced to the semifinals in three of the five years and captured the conference title in 2011 when the tournament was held at Pioneer Gym on the campus of CSUEB. With that championship victory, the Broncos earned the West Region’s top seed in the NCAA postseason and eventually advanced to the Elite Eight in Missouri.

Citizen Business Bank Arena, built and owned by the City of Ontario, opened Oct. 18, 2008. The state-of-the-art facility hosts Ontario Reign ECHL ice hockey and a variety of other sporting competitions, concerts, family shows, special events, and community activities, as well as private events. The venue is the biggest and most modern arena in the Inland Empire.

The arena includes 9,500 fixed seats with additional “portable” seating risers to accommodate capacities of 11,089 for concerts, 9,736 for ice hockey and 10,832 for basketball.