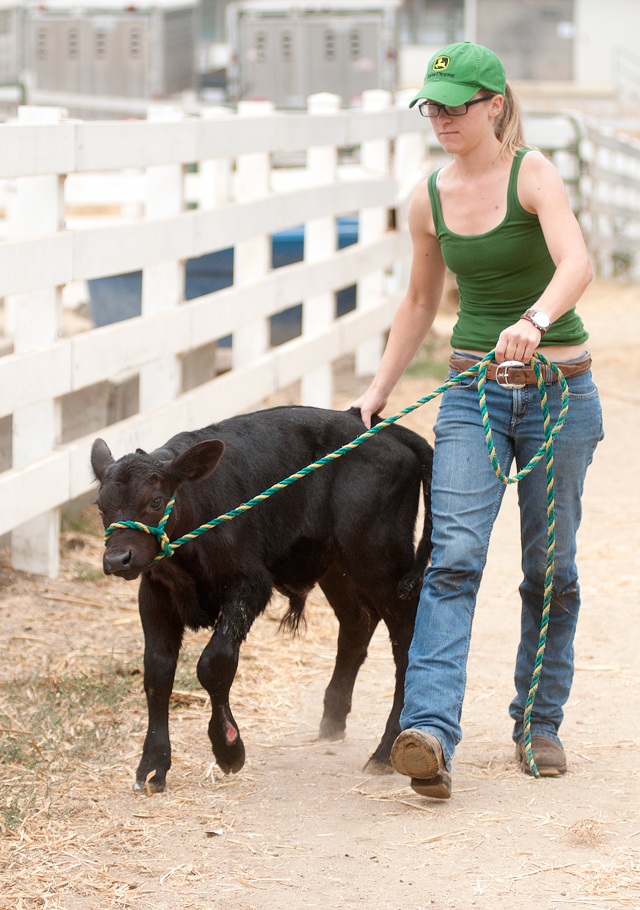 Ag student Laura Fogg considers the Cal Poly Pomona cows her own pets. The beef unit student assistant says they are some of the sweetest and most loving animals.

Those are some of the eye-openers she’s learned over the past year as she cares for and lives near the cattle, each of whom has a different personality and character traits.

One of her first charges at the beef unit was a 4-month-old calf that was especially curious and affectionate. A year later, “Maggie” still returns the love. “I call her and she comes running to me.”

Fogg, an animal science major, is one of two students who live and work at the beef unit. The job provides valuable hands-on experience with large animals, which will be useful when the animal science major applies to vet school next summer. In addition, Fogg gets a double room in one of the barn buildings and a small monthly stipend.

The part-time job of about 30 hours a week isn’t easy. The ad called for a self-starter, hard worker and quick learner – a description that perfectly describes Fogg. Though it didn’t explicitly ask for a jack of all trades, Fogg has evolved into a plumber, vet tech, machine operator, cattle wrangler and caretaker.

“Laura is doing very well here at the beef unit. She is a self-starter, you only have to ask her once and you can count on things getting taken care of,” says Anthony Estep, beef unit manager. “She is always trying to find something to do, not just waiting around until someone gives her something to do. When I’m gone for a couple days I know things will get taken care of.”

Fogg’s mornings begin at 6 a.m. with an early feeding. Next, she mounts a horse or hops in a truck to check on the cows grazing on the campus’ outer pastures, making sure they’re healthy and have water. She also brings in fresh hay and fills up the troughs with silage, which is fermented processed corn. On weekends, she cleans out the barns, restocks hay and sets up irrigation equipment on the fields.

“I walk through the pastures and make sure everyone’s healthy. It’s just real quick glances. You look for signs of them not feeling well, like huge distended abdomens or droopy ears or they’re just looking like they’re out of it,” Fogg says. “During the school year and with classes, I hustle. So some mornings I have to get up earlier.”

Recently, Fogg tended to a young calf, Rusty, who was born crippled. A veterinarian helped heal its legs but a too-tight bandage on its leg caused a large, bloody sore. Fogg washed the wound, applied antibiotics and wrapped fresh bandages every few days for the past two months.

Like a mother, Fogg speaks sweetly to Rusty and scratches his head. As she changes his bandage, he licks her hand and impatiently nudges her for food.

“Rusty couldn’t stand up because his front legs would buckle over, so he couldn’t feed. He’s been bottle-fed, every three hours, since birth,” she says. “Once he sees the bucket of food, his lips start moving. He’s so excited.”

On her off days from school and the beef unit, Fogg works part time as a vet tech at an animal hospital in Yorba Linda. The patients are much smaller but just as lovable.

“I just knew I always had a passion for animals and medical – medical whatever,” she says. “For a while, I thought I was going to be an anesthesiologist. Then I discovered my animal niche.