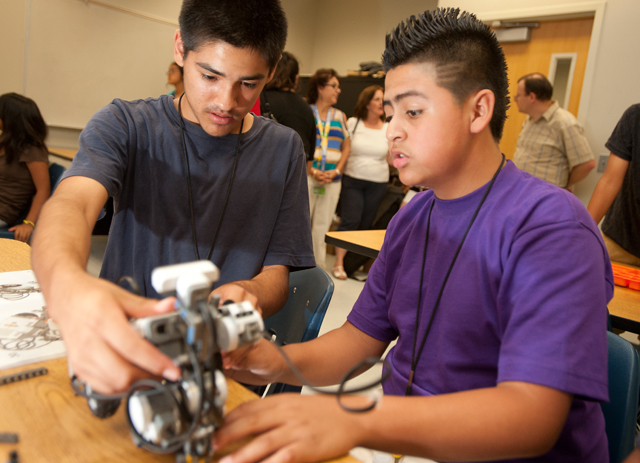 “I fell behind in school and wanted to get better. I didn’t know what I wanted to do,” says David Cuevas, an eighth-grader who is challenged every day because he is the son of a migrant family. “Now I want to come to Cal Poly Pomona to be an engineer to build buildings, robots and stuff like that.”

Cuevas is one of 30 middle school students from Bakersfield to benefit from a life-changing opportunity to get ahead in their studies while inspired to pursue higher education.

The Migrant Education Program, hosted by the College of the Extended University (CEU) on campus, plants the seeds of success for young students who wish to reach the same achievement levels as their peers in more stable families. The weeklong program, one of many sponsored by the California Department of Education, teaches math concepts reinforced with hands-on engineering-related activities.

The program focused on applied mathematics for students of the Bakersfield City School District to help them pass algebra 1 by the end of eighth grade. One of the highlights was a fighting robot competition that reinforced their classroom work. Jennifer Lopez, a student from the winning team and an aspiring math teacher, says she gained a lot from the program.

“I learned new and different ways to look at math,” she says. “I really liked it because now I’m better and understand it.”

Jawaharlal Mariappan, a professor in the mechanical engineering department who has been involved with the program for the past five years, says that instructing the students is a very satisfying experience. “We don’t need everybody to become engineers and we don’t expect it,” he says. “The fact that they came to us and said they want to become engineers and come to Cal Poly Pomona, that shows something has happened to them, and we provided an experience that’s personally meaningful.”

The Bakersfield district, which has been involved with the program since it began at Cal Poly Pomona in 2008, provides transportation and funds the program so students’ families do not have to reach into their own pockets.

The students stayed in the residence halls for the week, July 30 to Aug. 3, and got a sneak peek at college life. They furthered their learning at Disney’s World of Physics: Properties of Motion, where they saw real-world applications of many of the concepts they had been introduced to.

Lisa Lucio, program coordinator of the applied mathematics program, credits this collaborative effort to “the faculty and departments at Cal Poly Pomona, which further the university’s mission by allowing non-traditional groups of students to experience learning opportunities that they otherwise would not have.” She says it is “such a life-changing program that we are looking for ways in which to acquire additional funding so that we can open this program up to many more students, especially those in the Inland Empire, the San Gabriel Valley and surrounding communities.”