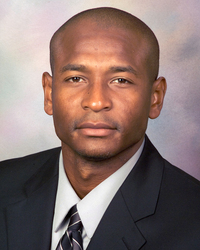 Director of Athletics Brian Swanson announced Tuesday the hiring of Octavious Gillespie-Bennett as the Broncos’ men’s and women’s cross country and track and field head coach. Gillespie-Bennett, who has collegiate coaching experience at Cal State L.A., Tulsa and UCLA, will start his CPP tenure this week.

“I’m very excited for this opportunity,” Gillespie-Bennett said. “Having worked in the same conference as Cal Poly Pomona, I’ve seen first-hand that the Broncos’ coaches and student-athletes are top notch. It’s going to be a great combination and I know we’ve got a bright future ahead of us.”

“Coach Gillespie is well respected among his peers and brings a wealth of knowledge and experience to our program that will greatly benefit our student-athletes not only in competition, but in the classroom as well,” Swanson said. “Having coached multiple national caliber student-athletes, he has successfully demonstrated the ability to move programs and individuals forward and I believe he will do the same at Cal Poly Pomona.”

With the guidance of Gillespie-Bennett, the Golden Eagles’ outdoor track and field teams achieved a wide range of accomplishments in 2012. As the hosts of the CCAA Championships in May, CSULA finished second on the men’s side and third on the women’s side. The men totaled the program’s most points in a conference championship meet since 1988 and the women placed third in both years during Gillespie-Bennett’s tenure.

Gillespie-Bennett also had a tremendous impact in his first season with the CSULA program in 2011 and was named the NCAA Division II West Region Assistant Coach of the Year for women’s track and field by the U.S. Track & Field and Cross Country Coaches Association (USTFCCCA). He helped Huntley to All-America honors in the indoor pentathlon and outdoor heptathlon and he helped Na’i Leni to a third-place national finish in the discus. Leni was also the West Region Field Athlete of the Year in 2011. Gillespie-Bennett also helped men’s jumpers Josh Como and Giorgio Bryant to national championships in the long jump and triple jump.

Prior to his time with the Golden Eagles, Gillespie-Bennett served as the field event, hurdles and multi-event coach at Tulsa from 2008 to 2010. During his time with the program, his student-athletes set 10 new Tulsa records, earned 21 All-Conference USA honors and won two Conference USA championships. He also coached three NCAA Division I regional qualifiers and one national qualifier. Gillespie-Bennett was the meet director for the 2009 Conference USA Outdoor Track and Field Championships.

Before he coached at Tulsa, Gillespie-Bennett was the decathlon coach and jumps assistant at UCLA from 2006 through 2008. Several of the student-athletes he coached placed in the Pacific-10 Conference Championships.

He was also the field event coach at the Brentwood Schools in 2004-05 and coached league champions in the boys long jump, high jump, shot put and girls long jump. He also assisted in meet operations and coached all field events.

Gillespie-Bennett competed for Lane Community College, UC Santa Barbara and UCLA. While at UCLA, he scored in the javelin and decathlon events at the 2002 Pac-10 Conference Championships.

Professionally, Gillespie-Bennett was the Guatemalan national record holder in the javelin (65.87 meters) and decathlon (7,448 points) and was a Pan-American competitor in 2003 and 2007. He was the Central American Champion in the high jump in 2004 and in the pole vault in 2007. He was also second in the long jump and third in the javelin in 2007.

He earned his bachelor’s degree from UCLA in 2003 and was a UCLA Student-Athlete Academic mentor from 2003 to 2005. He also served as the Assistant Athletic Tutorial Director for UCLA during the 2005-06 academic year.

Born in Guatemala and raised in the Portland area, Gillespie-Bennett now resides in Los Angeles.