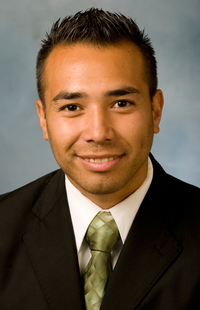 Director of Athletics Brian Swanson announced Tuesday the hiring of Erik Garcia as interim head coach for the Broncos’ men’s soccer program. Garcia, who served as an assistant coach at CPP in 2009 and 2010, will start in his new position this week.

“It’s an unbelievable feeling right now and I’m very excited for the opportunity,” Garcia said. “Since I stepped on this campus again for the interviews, it felt right and it felt like I was home. Through my time as an assistant here, I learned a lot from the university community and I learned to be a better person, coach and father. I’m thrilled to be back at Cal Poly Pomona.”

Garcia rejoins the Broncos’ program after serving one year as the associate head coach at Kansas Wesleyan, a program that competes in the National Association of Intercollegiate Athletics (NAIA). In 2011, he guided the program to a national ranking as high as No. 8 as the Coyotes tied the school record for wins in a season with 17.

“It is wonderful to have Erik back at the university,” Student Affairs Vice President Doug Freer said. “His experience with our program, established relationship with many of the student-athletes, and working knowledge of the regional soccer community make him an ideal choice to lead our team forward.”

Prior to his stint at Kansas Wesleyan, Garcia spent four years — two at CPP and two at Notre Dame de Namur — as an assistant under the mentorship of former Broncos’ head coach Lance Thompson. In 2009 and 2010, CPP put together back-to-back winning seasons for the first time in a decade.

“Erik has been successful at each coaching stop and he’s obviously very familiar with our program, having served as our assistant coach for two years,” Swanson said. “His knowledge of the conference and West Region will be extremely beneficial as we move the program forward.”

The Broncos came close to reaching the 2010 California Collegiate Athletic Association (CCAA) Championship, finishing 10-7-1 overall and 8-7-1 in conference action. The Broncos played particularly well against Cal State L.A., defeating the Golden Eagles twice in one year for the first time since 1999. Those wins included a thrilling 1-0 victory on Sept. 24, 2010, at Kellogg Field in front of more than 800 fans.

The debut CPP season for Thompson and Garcia in 2009 resulted in the Broncos becoming only the fifth team in school history to record at least 10 wins in a season, going 10-8-1. The year included an upset win over defending NCAA champion Cal State Dominguez Hills.

As an assistant coach with the Argonauts of Notre Dame de Namur in 2007 and 2008, Garcia helped Thompson lead the program to new heights. In 2008, the Argonauts went 14-3-3 and captured the Pacific West Conference title. Along the way, the team posted 12 shutouts and maintained a 0.62 goals against average in its 20 games. NDNU also established an NCAA Division II record with three goals in a two-minute and 10-second span. During Garcia’s two seasons with the Argonauts, the program recorded an overall mark of 24-12-4.

Garcia played two seasons for the Hawks of Holy Names in 2004 and 2005 after competing at Los Angeles City College previously. As a junior, he guided HNU to an NAIA postseason berth for the first time in school history. Garcia spent 2006 as an assistant coach for the Hawks and in that same year, earned his bachelor’s degree in sociology from HNU.

Garcia, a Los Angeles native who grew up in Honduras, is a 1999 graduate of Manual Arts High School in L.A. He has a son named Derik Ki.