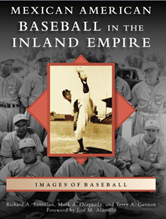 Richard Santillan, professor emeritus of ethnic & women’s studies, recently co-authored the book “Mexican American Baseball in the Inland Empire.” It showcases the history of Mexican American baseball in the Inland Empire through the first half of the 20th century. Santillan tells a story through pictures and text, sharing the sense of community Mexican Americans felt through baseball and also highlighting the struggle of discrimination that they faced and how they persevered. Santillan recently held a book signing at the El Monte Public Library.