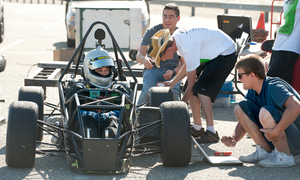 The Formula SAE team raced to a seventh place finish at the international competition in Lincoln, Neb., after rallying from a major setback that could have kept it from finishing in the top 10.

The annual competition, held for the first time at Lincoln Airpark, tests the creativity, quality and performance of formula-style race cars by college engineering students. Seventy-five teams were judged on acceleration, autocross and endurance, as well as static events such as business presentation and cost and budgeting.

Cal Poly Pomona’s setback came late on Day 3, June 22, after two race events and a day before the autocross and endurance matches. The steering column broke, and a replacement wasn’t available. Students raced to collect spare parts from other teams and quickly welded a new part before the next day’s competition.

“It was on-the-spot engineering,” says Alex Cawthon, a mechanical engineering senior and leader of the cooling system design team.

“We designed a system that took us four to five months in three or four hours,” says Ryan Bowers, design lead and chassis captain. “It’s a test of everyone’s patience, our ability to work as a team and our resourcefulness. It’s a big challenge, but everyone did a good job, worked really hard and we ended up putting out something really good.” 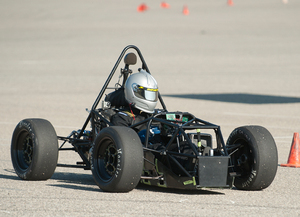 With a successful fix, Cal Poly Pomona finished 17th in autocross and 12th in endurance. Top 10 performances in nearly all other categories allowed the team to come in seventh overall and beat all other California teams, including UC Berkeley (15) and San Jose State (28). Other participants included: Colorado State University (22), Rochester Institute of Technology (26), University of Texas at Austin (30), CSU Fullerton (31) Cal Poly San Luis Obispo (36).

“We did really well overall,” says Cliff Stover, director of engineering laboratory & facilities and professor. “I think finishing in the top 10 as a California school that does all its own work is just incredibly good.”

Bowers, a mechanical engineering major, is already looking forward to next year, which will be his fourth in on the team. “We have more fine tuning, and we expect a stronger finish next year.”