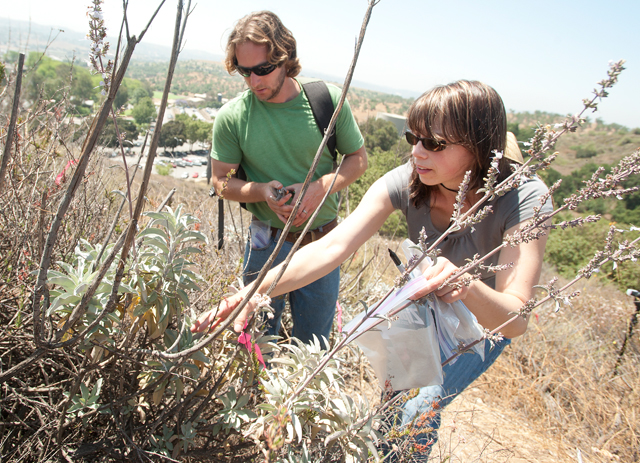 For a learning exercise, biology Professor Jayson Smith asked his students to adopt a behavior for a week that would benefit the environment. Most students became vegetarians, and others gave up driving alone to walk or carpool. One student made cleaning products using natural materials. A few cut down on shower times to conserve water, while one person took the additional step of forgoing showers entirely.

At the end of the week, Smith roughly calculated that in a three-day period, the 75 students in the environment and society class saved 225,000 gallons of water, 2,700 pounds in carbon dioxide emissions and about 150 gallons of gas.

However, “green” choices are not always clearly distinguished as good or bad, Smith says. The exercise paved the way for class discussions about “going green” as well as more serious environmental concerns.

“There are a lot of unknowns in environmental biology that need to be critically evaluated. There’s a lot of misinformation that needs to be sorted through,” Smith says. “I really push the students to read both sides and understand both sides and tease out the truth or the best-known truth.”

The complex issues of climate change, pollution, biodiversity, and water supply and quality are simply that — complex. They require scientists for analysis and to be part of the solution-finding effort.

Cal Poly Pomona’s environmental biology major, a program created in 2003 within the Department of Biological Sciences, takes a serious scientific approach while incorporating interdisciplinary subjects such as political science, urban and regional planning, agriculture and geographic information systems (GIS). One of the fastest-growing disciplines on campus, it started with 17 majors in 2005, then grew to 62 students in 2010 and now has more than 150.

Several emeriti faculty deserve credit for bringing the major into existence, says Sepehr Eskandari, biology professor and department chair. “Their vision, hard work and intimate knowledge of the discipline led to a program that provides scientific rigor while at the same time allowing students to get a broad training in environmental issues.”

“These are biologists who are interested in broader issues,” adds Professor Ángel Valdés, an expert in evolutionary biology.

The environmental biology program covers three major areas: conservation biology; ecosystem ecology and management; and environmental microbiology and biotechnology. In addition to receiving a strong foundation of chemistry, physics and math, students are expected to get their hands dirty in the field, whether it’s at the Rain Bird BioTrek, the Voorhis Ecological Reserve, or Southern California’s beaches, mountains and deserts. (However, the department has scaled back the number of field courses and trips in recent years because of budget cuts.)

In fact, one of the degree requirements is completing an internship or a research project. Faculty say that it’s good practice in learning how to design and conduct a scientific study, ask good questions, and analyze and interpret data.

The experience also deepens students’ understanding of science and the many other factors involved.

“There is no substitute for having students go through these processes themselves in their own research projects or in lab research projects,” says Professor Erin Questad, who specializes in plant diversity, invasive species and ecological restoration. “This is important for all areas of science, but it is really important for environmental biology because many of our studies occur in the field and it is difficult to have large classes do intensive field work.

“Scientific rigor is also important when our studies may affect policy or management decisions, so students should be aware of which aspects are important for a solid scientific study.”

Every Tuesday, Questad and student volunteers collect data from her experiment at the South Coast Research and Extension Center in Irvine. It’s a study of atmospheric nitrogen deposition and invasive grasses, and their effect on fire risk. Questad is also working on a $1.4 million grant from the Department of Defense to develop a software model that will identify suitable habitats in Hawaii and Southern California to reintroduce endangered plants.

“Environmental issues and problems are really coming to the forefront for a lot of people,” Questad says. “The students I’ve worked with are concerned about their environmental future. They’re seeing problems in their everyday lives from pollution, fires and invasive species.”

Certainly, some credit for the growing awareness can be attributed to the media, such as Al Gore’s documentary “An Inconvenient Truth.” This generation of students has also grown up with hybrid cars, compact fluorescent lightbulbs, reusable water bottles, and the term “Go Green” truly means something to them. Faculty members say that younger students are generally more open to or at least are more aware of environmental issues, and many have an emotional connection to solving those problems.

“I was originally a marine biology major at San Diego State University,” says Maricris dela Rosa, a senior who is interested in working as a field biologist or an environmental consultant at an engineering firm. “I kept hearing about environmental problems and how many animals that I wanted to study were being threatened. I wanted to make a difference rather than studying an animal and just seeing its habitat be destroyed.”

Gabriel Horowitz, a junior, switched from general biology to environmental biology in his sophomore year after discovering his passion for ecology and his desire to prevent more problems.

“In this day and age, it’s becoming more apparent that our environment’s health is threatened by the unsustainable practices of people,” says Horowitz, who hopes to work for a consulting firm that monitors the well-being of California ecosystems. “This has sparked public demand for professionals who can properly manage our environment and help protect it from further harm.”

Cal Poly Pomona is in a perfect location to produce professionals who can find solutions, help shape policy that will protect the environment, and teach future generations. On-campus resources such as the 76-acre Voorhis Reserve, home to more than 300 plant and animal species, and the John T. Lyle Center for Regenerative Studies provide many opportunities for students to learn about the environment and conduct their own experiments without having to travel very far.

“Conservation in California is particularly important because our state has an unusually high number of unique animals and plants,” says Professor Kris Lappin, chair of the zoology major/option. “California can be thought of as an island surrounded by significant barriers such as the Sierra Nevada and deserts.

“In fact, endemic California species — organisms found nowhere else on Earth — are such an important part of our environment that California has been identified as one of the planet’s biological hotspots. This designation also reflects the fact that most of the natural habitat in our state has already been lost, along with the wildlife that once called it home. An additional issue is that many exotic plants and animals, particularly from Europe and Asia, have been purposely and accidentally brought into California, many of which have displaced the native species.”

One of those future policy-shapers may be Monica Santander, a fourth-year environmental biology student who is also pursuing a minor in political science. Part of her interests lie in a research lab, where she sequences the DNA of sea slugs to understand their biodiversity, as well as their response to climate change. At the same time, she’s considering a career in environmental management to help with conservation and management efforts.

Santander, who grew up in Pomona, says the environmental biology program provides a comprehensive approach that lays a foundation in pure science without ignoring the social and political ramifications. 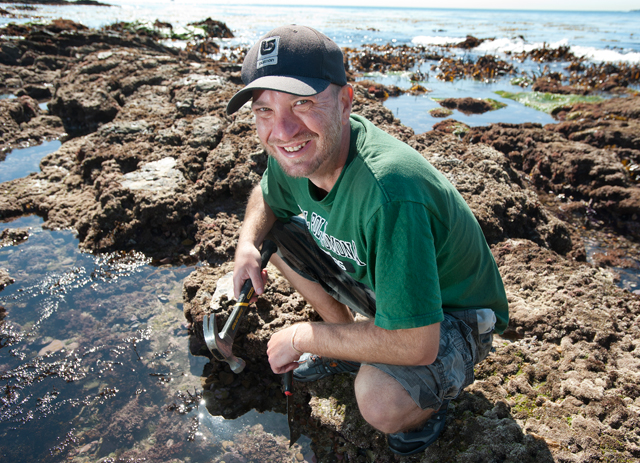 “You’re taking courses for not just the technical facts, but you are also taking courses that make you critically think about issues in a social, political, economic and ethical light. You have to understand the impact that any decisions can make on all people in society,” she says. “We aren’t isolated from the technical, and the technical isn’t isolated from the political and social. The two really need to be integrated. In class, we are writing, reading, debating, problem-solving, researching and presenting — and constantly challenging ourselves in these political and social realms.”

Smith sees environmental scientists helping to lead the charge in improving government regulations, finding more sustainable resources and showing people how to live a more sustainable lifestyle. With an interdisciplinary background, graduates will be able to research the science, interpret the results and help create good management and policies. In order to create positive change, scientists also need to effectively communicate their findings and recommendations, and their importance to people outside of their field such as elected officials, developers, businesspeople, civic leaders, philanthropists and journalists.

“Changes need to be made in our current structure. We need to start looking at more sustainable living, more sustainable resources. There’s a need for a lot of innovation in order for that to happen,” Smith says. “Giving students the basis for creating that innovation to solve some of those environmental problems is so important now. It’s good timing now. I see a lot of future jobs and careers in this field.”