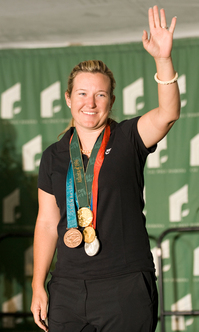 Kim Rhode was nearly perfect in London on Sunday, winning a gold medal in the women’s skeet shooting competition. Her record-setting performance makes her the first American to win individual medals in five consecutive Olympics.

Rhode missed only one of 100 shots, tying a world record and setting the Olympic mark. China’s Wei Ning and Danka Bartekova of Slovakia finished second and third.

A food marketing and agribusiness management major, the 33-year-old Rhode has taken home a medal (two gold, one bronze, one silver) at the four previous games.

She made her Olympic debut in Atlanta in 1996 when she was a 17-year-old high school student, stunning the international field with a gold medal win in double trap. She took home a bronze in Sydney and a gold in Athens. When women’s double-trap was discontinued in Beijing, Rhode made a remarkable switch to skeet shooting and won silver.