“When I was born, I walked. I came out with biceps and took off my umbilical cord.”

These are the words of a natural-born ninja — an amazing competitor who defied the odds to reach the finals of a grueling reality television show that tests athletic skill and strength of will.

Derek Nakamoto shatters the stereotype of the nerdy engineering major or the scholar who was voted “Most Stressed Out” in his senior year at Walnut High School. His outspoken charm, incredible physical abilities and humungous biceps sets him apart from virtually everyone else at Cal Poly Pomona.

He used those attributes to qualify as a contestant on NBC’s “American Ninja Warrior,” the popular obstacle course competition that mirrors the Japanese series “Sasuke.” The show promises to reward the champion with $500,000 and the title of “The First American Ninja Warrior.”

Becoming an “American Ninja Warrior” competitor has been a dream of Nakamoto’s since he was 16. Now 21, he submitted a video of himself doing stunts at a local gym and around campus. In the video, Nakamoto hangs horizontally from the railing of a staircase by the engineering building, leaps over tables behind the CLA and does backflips in the Rose Garden. It earned him an invitation to compete in the TV show’s regional qualifying competition, one of six that was held throughout the United States. He conquered that course and became one of only 100 nationwide to reach the finals in Las Vegas. 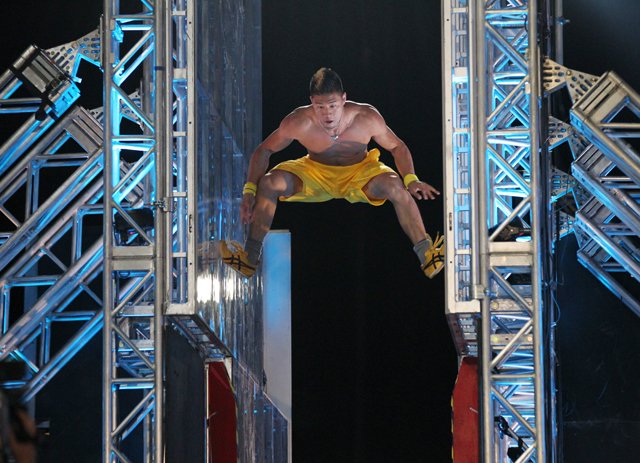 He mastered the first of four final stages in one minute and 34 seconds, easily under the time limit. The official Ninja Warrior account (@ninjawarrior) tweeted: “Derek Nakamoto is the real deal, just made conquering Stage 1 look easy!”

Nakamoto returned for Stage 2 of the finals, which aired July 23. The show was filmed back in April, so he had to keep the big secret for a few months. He made it substantially farther than nearly all his comrades and flew through four of six monstrous obstacles suspended over water before falling off the Metal Spin.

“I got on there, got a little sweaty palm and couldn’t hold onto that grip, but it happens,” Nakamoto said after climbing out of the water. Of the 24 contenders who made it to the second round, only one person was able to conquer that stage.

Although Nakamoto was not named the first-ever American Ninja Warrior, his feat was nothing short of a victory.

“The most memorable thing was being recognized and to finally have an opportunity to compete on a show I’ve been dreaming about,” he says. “When life gives you opportunities, it’s all about whether you take them.”

The show consists of an array of intimidating challenges: the Step Slider, the Rolling Log, the Jumping Spider, the Spinning Bridge, the Warped Wall. Nakamoto admits that the obstacles were 80 percent mental.

“It’s about you versus this thing,” he says. “A lot of times we have the ability to do it, but it’s about how people approach it that determines the outcome.” For those who are physically capable, the key was to stay focused. “That’s where my Asian breathing technique came from. It was my way of calming myself down.”

The difference between success and failure is minuscule, he says. One tiny misstep can lead to disqualification — something he hates any competitor to experience.

“It hurts to see your comrades fall when you want to see as many people succeed as you can. That’s just how ninja warriors are,” Nakamoto says.

One of his greatest rushes was to compete alongside several athletes from previous seasons he followed as a fan. “It’s like sitting next to Superman, Batman and Spiderman all together,” Nakamoto says. “The Avengers were here, and I was a part of them!”

In order to keep up with his competition, hours and hours of training were required. Nakamoto strives to find balance between physical activities, maintaining good grades, work, being an active member of the Nikkei Student Union and managing the Japanese Touzan Taiko drummers. He prioritizes and adheres to the Japanese philosophy of “kaizen,” meaning constant improvement. He feels that challenging himself in all aspects of life will promote growth and progression rather than bad habits.

When it comes to his personal life, however, the show has not necessarily had a great impact. He’s getting more dates, but it’s more quantity than quality, he says.

Outside of school, Nakamoto works as a personal trainer at 24 Hour Fitness. He says he doesn’t want to work there forever and wishes to open up a parkour gym in the Pomona area. The free-running sport focuses on efficient movement around obstacles by vaulting, rolling, running, climbing and leaping. Because there are very few parkour gyms to do his unorthodox training, traveling to big cities such as Hollywood, San Diego and Northridge is not only time consuming but gets expensive when it comes to gas.

“Hollywood is where all the stuntmen are,” he says. “But there’s passion in the people everywhere.”

Training is always on the to-do list for Nakamoto, who plans on participating in the next season of “American Ninja Warrior” with his dad, who will soon be 59 years old, in hopes of making history as a father-son duo.

He acknowledges that not everyone is cut out to be a ninja because it takes years of training, but everyone has the ability to follow his or her dreams. This ninja encourages the world to always accept challenges because “without challenge there is no change.”

(Middle photo: Derek Nakamoto moves through the Jumping Spider obstacle in the first stage of the finals of American Ninja Warrior in Las Vegas. Photo courtesy of G4.)