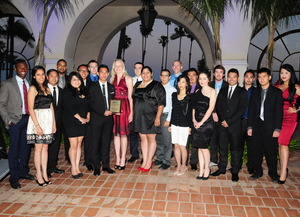 One of the main projects was an educational outreach project the team created.

“This year we wanted to rebrand the club, do other stuff and take on other projects,” says Eric Catig, student chapter president for 2011-12. “We created and taught a six-week engineering course to 40 students at East Los Angeles Renaissance Academy of Esteban Torres High School.”

The team received $300 and a plaque at the awards banquet during the Western District Annual Meeting in Santa Barbara, held June 24 to 27. The team also received $1,000 in travel funds for members to attend the meeting, which gave students the opportunity to learn from and network with transportation colleagues.

“The $1,000 allowed more people to come and attend the meeting in Santa Barbara. Usually it’s just a select few members and officers that are able to go,” Catig says.

The $300 award will be donated to the civil engineering department for traffic engineering software upgrades and scholarships for undergraduate and graduate-level transportation research.

ITE plans to raise awareness of the club’s contributions to the transportation field by partnering with other student organizations, updating their website at http://itecpp.wordpress.com/ and tweeting at @ITECPP.

To be involved with ITE, contact Ruben Hovanesian at rahovanesian@cpp.edu.