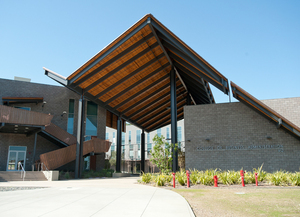 Lance Calvert, ’69, business, knows a thing or two about business success. As the first 7-Eleven employee given the chance to franchise his own store, Calvert has more than 41 years of experience with the convenience store giant and owns two 7-Eleven stores in Las Vegas.

Today, however, Calvert likes to focus on the rewards of his career success — namely, the joy of giving back.

Calvert and his wife, Elena, recently gave $150,000 to the College of Business Administration Building Complex Capital Campaign. This gift is in addition to their original gift of $250,000 (as lead donors in 2001) and a subsequent donation of $100,000.

Altogether, the Calverts have given $500,000 toward the new 70,000-square-foot complex, a state-of-the-art learning environment that will greatly expand the college’s ability to provide a premier education for today’s business students. The complex will open in September.

“I think the main benefit of the new CBA complex will be the sense of pride and renewed confidence for Cal Poly Pomona graduates,” Lance Calvert says. “The new buildings are state-of-the-art and technologically advanced. Students will be proud that they’ve graduated from such a cutting-edge facility.”

The complex will include two auditorium-style rooms, numerous technologically enhanced classrooms, collaborative learning spaces, and a faculty and student services building that will, for the first time, bring together all of the departments of the college under one roof. A new financial markets room will give students experience as analysts and portfolio managers as they oversee a real investment fund. In addition, the project will meet the strict guidelines required for LEED certification through the U.S. Green Building Council, a significant seal of approval for water and energy efficiency, pollution reduction and environmental quality.

For Calvert, donations to his alma mater seemed a natural fit.

“At some point in my life, I realized that I had become a good businessman; I wanted to start focusing on simply being a better man,” he says. “I used to take most of the credit for my accomplishments, but I started to really appreciate those who had contributed to my success. I had a father, mother and sister who all had sacrificed to make my life better.

“I also figured that Cal Poly Pomona made an investment in me some time ago and maybe it was time for that investment to start paying dividends,” he says. “I really feel like I’m part of a cycle. …I benefited from those who came before me and believe I should benefit those who follow me. That’s exactly what I’m trying to do.”

In recognition of the Calverts’ generous donations, two classrooms will be named in their honor when the complex opens in the fall. One classroom will be named the Calvert Family Classroom, in memory of George E. and Sybil M. Calvert and Marcia Calvert Moore (Lance’s parents and sister, respectively). A second room — with tiered seating to promote in-depth discussion and collaboration — will be called the Lance and Elena Calvert Case Room.

“I can’t thank the Calverts enough for their ongoing support of this very important project,” says Richard Lapidus, dean of CBA. “As lead donors, they understood early on the impact the complex would have on student learning and have increased their support over time to ensure our shared vision would become a reality.”

(Bottom photo: Lance and Elena Calvert with President Ortiz, left, during the Founder’s Society Dinner in 2007.)

Cal Poly Pomona has embarked on a $150 million comprehensive fundraising campaign to ensure that a quality college education is within reach for future generations of students. The campaign, which recently surpassed $100 million in donations and pledges, will strengthen the university’s ability to provide a hands-on education, to prepare students for the changing demands of the workplace, and to increase research and scholarship opportunities. The fundraising campaign relies on the support of the entire campus community — from alumni to faculty and staff to friends of the university. For more information, visit http://campaign.cpp.edu/.