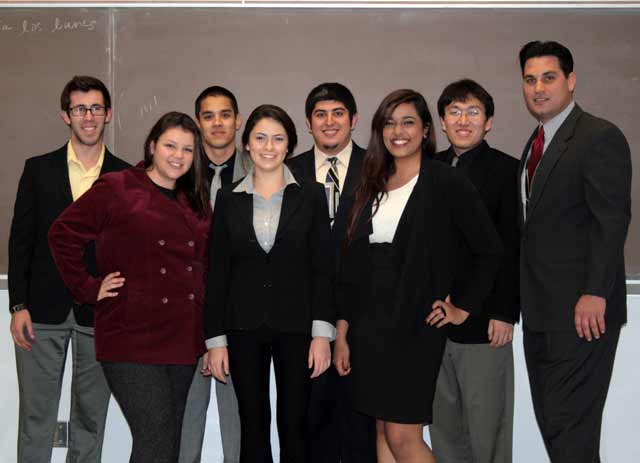 The 2011-12 mock trial team has achieved its highest scores in Cal Poly Pomona history, winning a third-place tie out of 36 teams at the UCLAssic Tournament, hosted at UCLA in January.

Many team members achieved near-perfect scores as both attorneys and witnesses against prestigious schools such as Howard University, UC Davis, Stanford and USC. Most recently, the team tied for third place out of 24 schools and also won a Top-8 trophy at the American Mock Trial Association (AMTA) Regional Competition, hosted by Claremont McKenna College in February.

“Words honestly cannot express how proud I am of my teammates and the success we have had this year with the program,” says Priya Patel, treasurer for mock trial and next year’s president. “As for next year, I hope to continue all of the success we have had from this past year. We have a great momentum going right now and I want to see us get to that next level of success and take home a national trophy.”

The eight-person team, which is sponsored by the political science department, began preparing for this season last August, when the AMTA released a new case to more than 630 teams across the United States. In this year’s case, a young woman died on the night of her birthday in a car accident after she and two friends left a bar under the influence. The driver was facing multiple offenses, including murder.

To prepare for competition, students dedicated countless hours to studying legal documents, case theories and legal rules on top of regular practice hours. It is a must that each member is prepared for anything, as there are no scripts to refer to during the trial. Ultimately, whoever is the most knowledgeable of the facts and the most persuasive, wins.

Compared to other teams, Cal Poly Pomona’s mock trial team has less funding, but has defeated some of the best teams in the entire country. 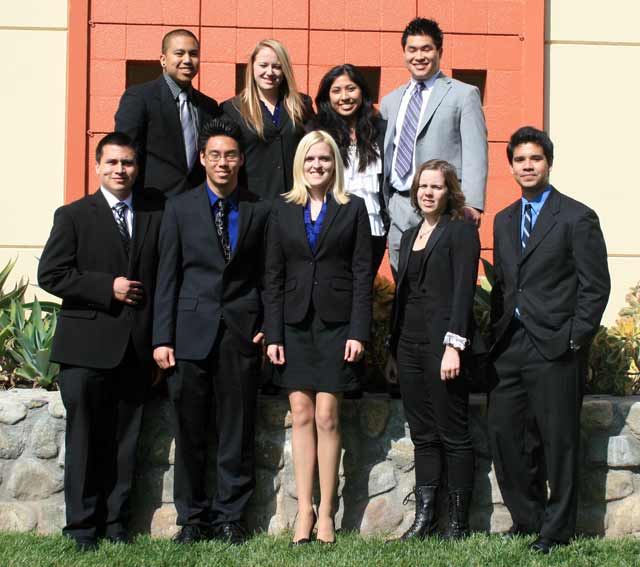 “That’s because of the excellent coaching of local trial attorney Raul Sabado and recent graduate Keith Ruiz,” says team captain Justin Page. “Professor Sabado brings in multiple LA County public defenders and prosecutors to give us feedback on our case and arguments. The learn-by-doing philosophy has clearly been successful.

“Our tenacity and talent has brought us unprecedented success,” Page adds. “Schools are contacting us for scrimmages, tournament invitations, and the online mock trial community has recognized Cal Poly Pomona as a national contender.”

For now, the mock trial team will be taking a break from a stressful eight-month season. Come Aug. 15, they’ll get to do it all over again.

Patel hopes to expand the program further and give more students the chance to compete.

“Mock trial is really a unique program for students who are looking to pursue a career in law,” she says. “Being a part of this program was one of the main things that gave me the courage and confidence to take the plunge and pursue a career in law. I hope we can do the same for others next year.”

Students who are interested in Mock Trial must first take PLS 308 and 308A, which are offered in the fall quarter. Contact Professor Sabado at rcsabado@aol.com for more information.