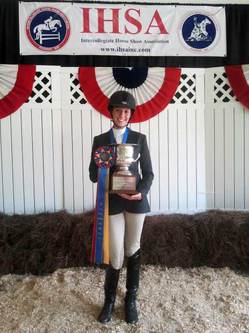 Lauren Alexander, a fifth-year general anthropology major, has been riding horses since she was 10 years old. She came to Cal Poly Pomona largely to be on the Intercollegiate Horse Show Team, and rides Dexter almost every day.

Now her hard work has paid off. At the 2012 Intercollegiate Horse Show Association National Championship in North Carolina, Alexander won first place for Alumni Equitation on the Flat.

“I was in shock,” Alexander says. “It was a dream come true. I had been imagining that moment all year.”

In her event, Equitation on the Flat, riders are judged on their ability to ride a walk, trot and canter, sometimes without stirrups. Alexander entered in the alumni category because riders are allowed to compete as an undergraduate for only four years.

On her path to nationals, Alexander placed first in the regional competition and second in the zone championships. At nationals on May 5, Alexander competed against 17 other riders.

Hailey Quirk, Alexander’s trainer and volunteer coach of the equestrian team, knew she had what it took.

“I’d seen her ride and she was absolutely up there,” Quirk says. “I told her, ‘You can definitely win this.'”

Incidentally, Quirk, ’08, music, won the same award in 2009. Since the trophy is a perpetual one, it now has the names of two Cal Poly Pomona students on it, which gives Alexander Bronco pride.

“I love looking at the trophy and seeing our names on there from Cal Poly Pomona. It’s so amazing to have two victors from CPP.”