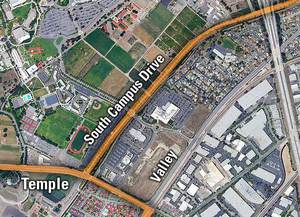 When students, faculty and staff return to campus in the fall, they’ll see and experience a pleasant surprise: The roads around campus will get a complete makeover this summer.

With federal, state and county funding, the city of Pomona will completely rehabilitate South Campus Drive, which includes a new cement base and rubber asphalt. In addition, construction crews will repave sections of Temple Avenue and Valley Boulevard.

The South Campus Drive project will begin June 18 from Temple Avenue to Kellogg Drive. At least one lane of traffic in each direction will remain open, but the intersection of South Campus and Kellogg may be closed for up to four hours a day during the middle of the day.

The second phase of construction is from Kellogg Drive to East Campus Drive, and the third section is from East Campus to Ridgeway Street. The entire project is expected to be completed in late October.

The project will also create dedicated bike lanes on both sides of the street from Ridgeway to Kellogg, eliminating street parking.

Bevans asks the campus community to be patient during the construction process, especially when roads are closed in the middle of the day.

“There will be delays. Kellogg at South Campus could be closed for a few hours because of the work they have to do and to protect the workers,” Bevans says. “The roads will be open in the morning and evening, but during the middle of the day, drivers should consider using University Drive. It may take a little longer to get around campus, but at least they won’t be stuck.”