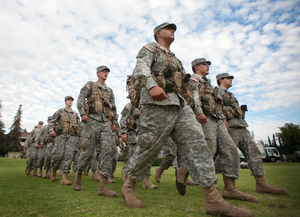 The life of an ROTC student can be a grueling one, with early morning physical workouts, a full load of classes, ROTC lab exercises on Fridays and weekend commitments.

No one ever said the Reserve Officers’ Training Corps would be an easy journey. But when students graduate from college, they not only earn bachelor’s degrees, they also can look forward to becoming commissioned officers in the military, positions that require effective leaders who can handle difficult situations and make tough decisions.

Cal Poly Pomona’s 40 cadets are part of the Golden Lions Army battalion, which has about 220 people from different colleges and universities in the area and is based at Claremont McKenna College. The program offers foundational courses in leadership, teamwork and American military history to both ROTC and non-ROTC underclassmen. In the final two years, the program becomes more intense and packs substantial responsibilities.

“You’re working for the U.S. Army, the U.S. government,” says computer information systems senior Eric Mayberry about the third- and fourth-year students. “It’s not like you’re in a club where you can choose to be a flake or not.”

The onus of running ROTC falls entirely on the older cadets in order to prepare them for their future positions. Army staff officers set the overall mission, but it’s up to the fourth-years to plan and organize the classes, training and exercises and for the third-year students to execute those plans.

“By their senior year, they’re actually running the program,” says Army Captain Andrea Rodriguez. “We give them a lot of responsibility because we know that when they commission, they’ll need those skills — time management, stress management, physical and mental health, and interpersonal skills.”

The ability to make good decisions, manage time effectively and accomplish goals can translate from a military setting into college and career environments.

“When we plan for ROTC, we do what’s called a T-minus-7 or T-minus-8 calendar. We plan eight weeks out,” says fourth-year cadet Jeremiah Solven, who is studying kinesiology. “You have a similar concept as a student. You look at your quarter and how many units you’re taking. I get my weekly calendar view, and I look how everything pieces together.”

David Evans, a senior studying technology and operations management, says he joined ROTC because it will allow him to serve his country and have a civilian career. After graduation, he’s looking forward to a second lieutenant position in the Quartermaster Corps, which is in charge of keeping track of supplies for an Army company. As a reserve officer, he hopes to also have a full-time career in operations management.