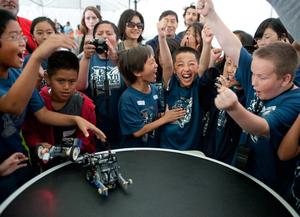 Hundreds of elementary and middle school students and the joyous screams of victory filled the Engineering Meadow. Their excitement and sheer number could only mean one thing: the sixth annual Robot Rally.

The goal of the May 11 event, which drew twice as many people as last year, was to introduce students to engineering programs and “excite, engage and excel,” them in STEM (science, technology, engineering and math) subjects, said Professor Mariappan Jawaharlal, mechanical engineering. During the Robotics Education through Active Learning program, 600 students from 14 local schools learned to build and program LEGO robotics kits. After weeks of hard work, students exhibited their robots in the four challenges of the Robot Rally.

In the sumo challenge, students used their robot to try and knock the opponent’s robot off the table. In the obstacle course challenge, teams programmed their robots to complete a complex tabletop maze, while the goal of the line-following challenge was to keep the robot from deviating from a taped path. All of these events required the students to pre-program their robots.

Although it is a competition in which the best robots will win, students congratulated each other instead of getting angry or upset. While they are having fun, their teamwork fosters interest in robotics and engineering programs, and extends the university’s learn-by-doing philosophy to young minds. 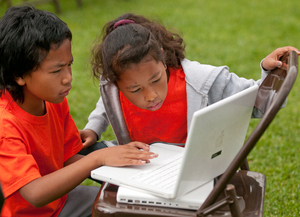 “It’s great exposure to a college campus and a program they’re interested in,” said parent Rebecca Rodriguez, whose son attends Whittier Christian Elementary School and has participated in the event for two years.

When asked about his favorite part of the event, student Jesse Santiago from Barfield Elementary said “participating and having fun.”

With help from the Cal Poly Pomona Robotics Club and undergraduate volunteers, Associate Dean Cordelia Ontiveros from the College of Engineering presented participation awards to students, teachers and school administrators.

(Top photo: The Worst Nightmare team celebrates a Sumo Robot win during the 5th Annual Robot Rally on May 11. Bottom photo: Garrett Cabilan and his sister Kenya program their robot.)