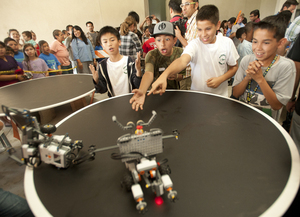 It’s hard to predict which schools will prevail at the sixth annual Robot Rally on Friday, May 11, but this much is certain: Many contenders will yell themselves hoarse, some will jump for joy, a few will stare in disbelief — and all will leave the event with a greater interest in engineering.

The rally, which will take place in the atrium of Building 17 from 9:30 a.m. to 12:30 p.m., is the culmination of several months of hands-on training and preparation at a dozen elementary and middle schools from throughout Southern California. More than 600 students from fourth through eighth grade will compete. Half are female and nearly 80 percent are Latino.

“This will be the largest gathering of students in the entire country for a school robotics event,” says Mariappan Jawaharlal, a professor of mechanical engineering and the founder of Robotics Education through Active Learning (REAL). The program involves several faculty members from the College of Engineering, CLASS and the College of Science.

Students will compete in four categories. The sumo challenge, in which two robots try to push the other from a table, typically draws the most enthusiastic response. The impromptu obstacle course requires competitors to program their robots to maneuver, stop and recognize colors. In the fast-line challenge, students use advanced algorithms to quickly propel their robots along a path. The fourth event is a teamwork exercise.

Teachers involved in the program received a two-day training session at Cal Poly Pomona before instructing their classrooms, usually once a week starting in January. Some of Jawaharlal’s undergraduate students and fellow professors in REAL join him in assisting. Time Warner Cable has made a commitment to support the program, and Jawaharlal is writing proposals seeking funding from additional sources.

“It’s vitally important that we encourage an interest in STEM education early on,” Jawaharlal says. “Students from working-class families can do just as well as their better-off counterparts if we engage them in elementary school.”

Every year, Jawaharlal does a simple exercise to buttress his point. At the first class session, he asks how many are interested in engineering. “Not a hand goes up,” he says. “At the end, just before the Robot Rally, I ask the same question. Everyone’s hand goes up.”

(Photo: A team from the Shelyn School reacts to a battle during a robot rally on May 5, 2011.)