University police officers are investigating a robbery on Thursday afternoon that is similar to a crime in the same general area earlier this week. Both robberies involved cell phones, and descriptions of the assailant are similar.

Students, faculty and staff should be aware of their surroundings and report any suspicious-looking people or situations immediately. Call University Police using a code blue box or (909) 869-3070.

Additionally, pedestrians should be careful when using their cell phones while walking. The two victims this week were unaware that the robber had approached until the last moment. Crimes should be reported right away in order for police officers to respond immediately and attempt to apprehend the robber or begin follow-up investigations while potential witnesses are still in the area.

Around 3:10 p.m. on Thursday, May 3, a white male approached a student who was walking through Parking Lot K toward the bus stop at Temple Avenue and South Campus Drive. After demanding to see the student’s phone, the man punched him in the face, took the cell phone and ran. The robber was last seen running from Lot K to the bus stop.

The robber is described to be in his early 20s with a thin build and blond hair. He was wearing a blue polo shirt with white horizontal stripes and white or light tan khaki pants. 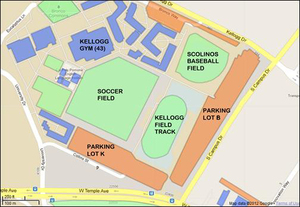 The crime is similar to a reported robbery on Monday, April 30, in which a white male in his early 20s asked to use a student’s cell phone, then punched him in the face and ran away. The student was walking on the sidewalk between the track at Kellogg Field and Scolinos Field near Parking Lot B.

In this incident, the robber was described to be about 5-foot-9, with blond spiked hair and a thin build. He was wearing a black shirt and dark jeans and had a cigarette behind his left ear.

Anyone with information about these crimes is urged to call University Police at (909) 869-3070. Anonymous tips may be reported by leaving a voicemail at (909) 869-3399. This number provides voicemail features only and does not display or record location or caller ID information.