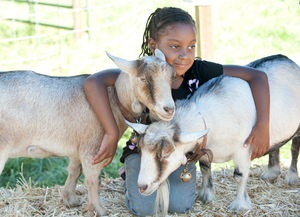 Penelope the pot-bellied pig spends her Saturdays sunning herself in the pen next to the Farm Store. She shares the enclosure with eight Nigerian Pigmy goats and three sheep but pays them no attention, preferring to snuffle along on the periphery. When the petting zoo opens at 11 it becomes clear that Penelope is a fan favorite — children take turns scratching her on the back, and she falls over with her eyes closed.

Danny’s Farm, a new addition at Cal Poly Pomona, was founded in 2007 by Jim and Cathy Gott for their son Danny who was diagnosed with autism. The nonprofit organization supports children and adults with autism by offering job opportunities and therapeutic interaction with farm animals.

In January 2011, Danny’s Farm almost ceased operations when it lost a zoning dispute with county officials in Altadena. Broc Sandelin, chair of the animal and veterinary sciences department, read about the Gotts’ situation and contacted them to suggest a collaboration.

“We were grieving, thinking we were done,” says Cathy Gott, co-founder of Danny’s Farm. “Then Broc called. I was so excited.”

It was a match made in heaven.

“We’ve wanted to have a petting farm on campus but we didn’t have the manpower. They had the labor resources but didn’t have a place to put it,” Sandelin says. “This partnership is pretty much a win-win.”

Under a partnership of the College of Agriculture and the Cal Poly Pomona Foundation, the petting zoo made its debut on the weekends before and after the annual Cal Poly Pomona Pumpkin Festival last October, and it was a hit. Girl Scout troops, Cal Poly Pomona students, and children from surrounding schools came to cuddle the animals.

Although Danny’s Farm has been popular with visitors, it is more than just a petting zoo. Danny’s Farm and the San Gabriel Pomona Regional Center have partnered to support people with developmental disabilities and hold after-school programs for children with special needs. Their aim is to embrace and support integration of the autistic community.

The staff for Danny’s Farm is recruited from the special-needs population, and Cathy Gott hopes that this partnership will inspire others to offer employment as well. The number of children with autism has been growing dramatically, and Gott realizes that their difficulties are compounded when they reach adulthood.

“These children are aging out and they need jobs,” she says. “So it’s about educating people that they can, and want to be, very productive members of our society.”

Now they are setting their sights on expansion. Lerae Sandelin, Danny’s Farm Manager, is hoping to raise money for a permanent structure next to the pen so that more animals can join the fun on Saturdays. She wants to bring in bunnies, guinea pigs, hamsters, chickens and roosters, but the enclosure next to the Farm Store isn’t set up to include them.

“It’d be so great to get a barn out there,” Lerae says. “That’s my dream right now.”

In the meantime, Penelope the pig will continue delighting Danny’s Farm patrons on Saturdays.

Danny’s Farm is open on Saturday from 11 a.m. to 3 p.m. next to the farm store. The Danny’s Farm mobile petting zoo is also available by reservation. For more information visit http://dannysfarm.org/ or call (213) 607-4432.