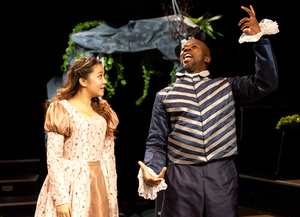 The eighth season of the Southern California Shakespeare Festival presents “The Tempest,” a story of betrayal, forgiveness, romance and magic.

The summer theatre festival will bring together eight student performers, three alumni and one professional from the Actor’s Equity Association, as well as a team of student designers and managers. Opening night is Saturday, Sept. 8 at 8 p.m. in the Studio Theatre.

“‘The Tempest’ has great comedy, great heart. One of the central themes is forgiveness,” says guest director Sam Robinson, whose career includes performances in two versions and direction in three iterations. “The characters are so rich. There’s magic in this play.”

The first act opens with a storm striking a ship carrying guests traveling from a royal wedding. While watching the shipwreck from the shore, Propsero, a magician and supplanted duke of Milan, explains to his daughter that he conjured the storm in order to confront the people who exiled them on an island for the past 12 years. With the help of a spirit named Ariel, Prospero creates illusions to expose his enemies.

The play will be set in Bermuda (the text does not say where the island is located) during Shakespeare’s time in the early 17th century. The Studio Theatre, which seats about 100, will have the stage at the center and the audience sitting on all four sides. The “in the round” seating will foster an interactive and engaging experience for the cast and audience, Robinson says. 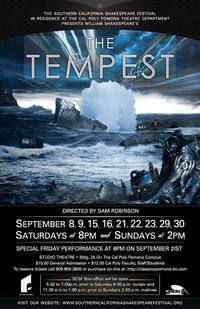 A prime opportunity for students to work alongside professionals, the Shakespeare Festival has a shorter rehearsal timeline than regular campus productions and a longer performance schedule. The experience gives students a taste of professional theatre productions.

Last summer at Cal Poly Pomona, Robinson directed “The Bear” and “The Proposal,” two one-act plays by Russian playwright Anton Chekhov. Robinson is a longtime friend and collaborator of theatre Professor Linda Bisesti, who is the producer and artistic director of the festival. He has performed, directed and taught in London, Canada and across the United States. For the past eight years, he has been an artist-in-residence through the Los Angeles Cultural Affairs Department and is a master teaching artist through the Music Center of Los Angeles and the Orange County Performing Arts Center.

Robinson, whose has worked extensively in community and multicultural theatre, says he is excited to again work with Cal Poly Pomona students because of their energy and enthusiasm.

“The diversity of shows produced here on campus really produces artists who take risks and generally have fun on stage, whether it’s a drama or a comedy,” he says. “The joy of performing is really important.”

Also, with his familiarity on campus, Robinson has observed many students develop and mature in their craft. “I’ve been able to see them in a small role, recognizing their talent and commitment. When we can offer a role that they can grow and stretch in, it’s really fantastic.”

(Top photo: Kiersten Tanopo as Miranda and Michael Kachingwe as Prospero in Shakespeare’s “The Tempest.”)