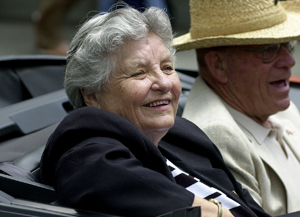 Ina Abelar, former president of Staff Council and an instructional support technician in the physics and astronomy department, died May 14 at the age of 85.

Abelar, who was hired in 1967, formally set up and organized the department’s stock rooms. She also developed a Physics Demonstration Manual used by the faculty and played a lead role in building new demonstrations for instructional purposes.

“She was the first technician for the physics department,” says Doug Johnson, equipment technician in the physics and astronomy department. “When she first got here, there was a stock room which wasn’t very big… She had to start from scratch and build up the department for lower division labs. She really did a yeoman’s job in the time she was here.”

Abelar also served as Staff Council President from 1977-78 and received the Outstanding Staff Award in 1984. While working full time, she earned a bachelor’s degree in music from Cal Poly Pomona in 1978. Abelar also served as president and treasurer of Pacesetters, the organization for retired faculty and staff of Cal Poly Pomona. In 2002, she received the Outstanding Staff Emeritus Award at the Founder’s Celebration.

During the 1970s after the fall of Saigon, Abelar sponsored three brothers to come to the United States. They were the siblings of Tien Nuygen, her student assistant in the College of Science.

“It was the kind of person that she was to do something for someone just because it was the right thing,” says her daughter Mickie Prostler. “All three succeeded to become an engineer, doctor and lawyer. I count them as my brothers, and I know that my mother thought of them as her children.”

After retiring in 1988, Abelar dedicated herself to volunteering for the Pomona Habitat for Humanity, which provides free labor to build homes for those in need. She assisted in building 35 homes in the area and five homes outside of California.

“Volunteerism is a good thing for retired people,” Abelar said in the fall 2002 issue of PolyTrends magazine. “It keeps them healthier in mind and body. Just because they retire doesn’t mean they’re useless.”