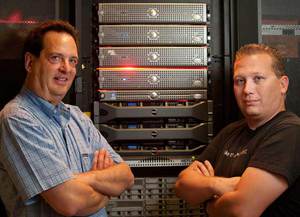 Cyber defense education at Cal Poly Pomona has received a significant boost with a gift of nearly $350,000 from Southern California Edison, World Wide Technology and Cisco to establish the SCE Virtual Information Assurance Laboratory. The facility, coupled with a classroom in the new College of Business Administration complex, will significantly expand cyber security education and collaboration with academic and industry partners.

“This lab will give faculty and students hands-on access to cutting-edge virtualization technology,” says Mahvash Yazdi, senior vice president for information technology and business integration and CIO at Southern California Edison. “As technology advances, so do our risk areas, which is why it is critical to educate the next generation of cyber security professionals. The challenge is to prepare students to anticipate threats and to solve problems that don’t exist today.”

The lab also serves as the virtual stadium and proving ground for the nation’s newest sport. The National Cyber League, which began play in April with seed money provided by the National Science Foundation, gives students a chance to hone their cyber security skills though individual and team exercises. Cal Poly Pomona is not fielding a team this season, but computer information systems Professor Dan Manson is serving as league commissioner.

“Unlike other cyber competitions in which all teams defend against a common enemy, the goal is for teams in the NCL to go head to head, defending their turf while trying to take down the opposition,” Manson says. “It’s like an Ultimate Fighting Championship event, but they’re throwing binary numbers instead of fists and elbows.”

Manson’s long-range goal is for the NCL to expand not only in higher education, but to grow roots in high schools and even junior high.

“The more that we develop this as a sport, the more that we make it cool and inviting, the more we will interest young people in pursuing cyber security,” Manson says. “The cyber world is becoming an increasingly dangerous place. We need more cyber warriors to defend against attacks that could gravely wound our nation’s economy and infrastructure.”

It’s a view that Yazdi shares.

“According to the FBI, some of the most critical threats facing our nation stem from the cyber realm,” she says. “That is why it is paramount to train the next generation of cyber security professionals. The challenge is to prepare students for tomorrow’s challenges.”

The SCE Virtual Information Assurance Laboratory will enable students and faculty to have hands-on access to cutting-edge virtualization technology. It provides high-bandwidth connectivity worldwide, with servers located in a secured data center on campus and maintained ’round the clock by IT professionals.

“Cal Poly Pomona’s polytechnic mission requires relevancy to rapidly changing business and industry needs,” says Richard Lapidus, dean of the College of Business Administration. “A prerequisite to staying relevant is ongoing partnerships with business, industry and government. We can partner through leveraging the virtual lab to provide proof-of-concept pilot projects, targeted corporate training and a higher level of collaboration and engagement between the college and outside partners.”

The gift makes good business sense for Southern California Edison as well as higher education, says Yazdi, who graduated from Cal Poly Pomona in 1974 with a degree in business administration

“By investing in higher education, we are fostering the academic success of our future workforce,” she says. “This is very important to SCE, which is why we focus on science, technology, engineering, arts and math, all of which build a foundation of student empowerment and innovation.”

Cal Poly Pomona has embarked on a $150 million comprehensive fundraising campaign to ensure that a quality college education is within reach for future generations of students. The campaign, which recently surpassed $100 million in donations and pledges, will strengthen the university’s ability to provide a hands-on education, to prepare students for the changing demands of the workplace, and to increase research and scholarship opportunities.

The fundraising campaign relies on the support of the entire campus community — from alumni to faculty and staff to friends of the university. For more information, visit https://campaign.cpp.edu/.