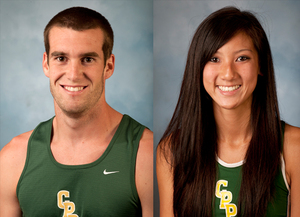 The championships will be held May 24 to 26 at the Neta and Eddie DeRose Thunderbowl in Pueblo, Colo. Colorado State Pueblo is the host for the 2012 and 2013 D-II National Championships.

For Deavers, a senior out of Lake Elsinore, this will be his second appearance on the track and field national stage. At the 2011 championships in Turlock, Deavers finished seventh in the 400-meter hurdles event to earn All-American recognition.

He’s raced to a career-best 52.18 in the 400-meter hurdles on two different occasions in 2012. The first came during day one of the Cal/Nevada Invitational in Claremont while the second took place on the final day of the California Collegiate Athletic Association (CCAA) Championships. The 52.18 ranks fifth all-time in the Broncos’ record books and is at No. 15 nationally going into the D-II Championships. Lincoln’s Sabiel Anderson is the favorite with a seed time of 51.03.

Dinh is also familiar with the National Championships setting, having two appearances at that stage with the cross country team. In 2010 as a sophomore, she helped the program advance to the championships for the first time in 25 years. This past fall, Dinh qualified individually for the D-II National Championships in Spokane, Wash., where she placed 36th to receive All-American distinction.