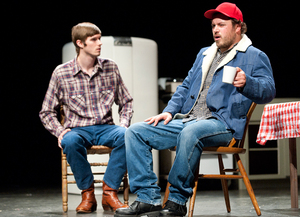 The theatre department presents Sam Shepard’s “Curse of the Starving Class,” a dark comedy that deals with the breakdown of the American Dream. The show will open May 11 and run through May 20.

“Curse of the Starving Class” portrays a family living in California during the decline of the family farm and the disappearance of unspoiled land. The play will feature, for the first time, one of Cal Poly Pomona’s own lambs. The lamb is on stage for much of the performance and occasionally acts as a non-verbal participant that characters direct monologues toward.

Working with a live animal on-stage proved a challenge, but getting it from the university made the process much easier.

“We’re very fortunate to be able to get the lamb from the wonderful College of Agriculture,” says director and theatre Professor Linda Bisesti, who worked with livestock technician Steve Miller and Broc Sandelin, chair of the animal and veterinary sciences department. “I have to thank everyone up there, because they’ve been incredible.”

Bisesti says the lamb has been initiated into the cast.

“I think we’re going to try and name it this week. I like ‘Howard.'”

Weeks before the play is set to open, the actors are at home on the set and with each other. They run across the stage, set up props, fiddle with the set and shout to each other in their characters’ dialects.

Bisesti believes that this closeness between actors is essential for a successful play, particularly for “Curse of the Starving Class.”

“This play is such an intimate family drama. I think it’s important for them to have that opportunity to really bond.”

This dynamic also allows the actors to discover their characters through performance, instead of basing it solely on the script.

“I think it’s better as an actor to be in the mindset of discovery,” says Job Barnett, a fifth-year philosophy and theatre major. “You discover more about your character as you rehearse.”

(Photo: David Lepone as Wesley Tate and Rob Shields as Weston Tate in “Curse of the Starving Class.”)