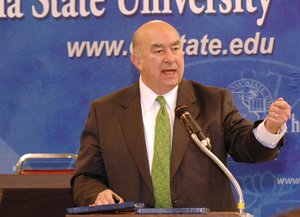 California State University Chancellor Charles B. Reed announced today that he will retire as chancellor of the CSU following a 14-year tenure with the university system.

In a statement sent to CSU campuses and employees, Reed said that he came to the CSU because of his belief in its mission.

“It has been an incredible honor to serve as chancellor of the California State University during such a dynamic period in the university’s history. Over the past decade and a half, the CSU has emerged as a national leader in providing access and support to students from a wide range of socio-economic backgrounds. Our campuses have continued to flourish even in the face of budgetary challenges and tremendous growth. Throughout my time here, the CSU has grown by more than 100,000 students, and I have been honored to sign more than a million diplomas. I take great pride in the CSU’s mission to serve California’s students, and I am proud to have played a role in carrying out that mission during these critical years.”

Including his 13-year tenure as the chancellor for the Florida State University system, Reed has spent more than a quarter-century as the leader of the country’s largest higher educational systems. He has earned national and international recognition as an innovator, problem-solver and strategic thinker. He has steadfastly defended the mission of public higher education, and has earned a reputation as one of the country’s premier experts on P-16 collaboration, institutional aid, and outreach to under-served student populations.

“Nobody has cared more about the mission of the university, worked harder despite overwhelming challenges or advocated more passionately on behalf of the CSU than Charlie Reed,” said CSU Trustee Bill Hauck. “His leadership over more than 14 years has been invaluable, and he has managed the institution through some of the most difficult times in its history. Charlie leaves a legacy that puts students first, and clearly positions CSU as a place that offers hope and opportunity to a whole generation. As one of the board members who hired Charlie, I want to express my deep gratitude for his commitment and service.”

Under Chancellor Reed’s leadership, the CSU has pursued strategies to serve more students from traditionally under-served backgrounds, including students from minority groups who come from homes where English is not spoken or who are the first in their families to attend college. Recognizing that these students would require more outreach and support, Reed launched a series of initiatives to recruit and retain more students from under-served populations. The CSU now works closely with community organizations to assist Latino, African American, Asian Pacific Islander, and Native American students and parents, as well as veterans to attend the CSU.

Over the past four years, Reed has had to manage severe state budget cuts to the CSU totaling more than $1 billion or 35 percent while addressing increased enrollment demand, particularly from students from underserved groups. Since he arrived at the CSU, the system has grown by 100,000 students to 427,000 and added a new campus — Channel Islands.

“As chair of the board of trustees, I have seen up close the difficult decisions Charlie has to make every day, and the enormous job of serving as chancellor of a university system serving more than 420,000 students,” said CSU Board Chair Bob Linscheid. “Charlie has persevered through the worst budget crisis in the history of California, and has had to deal with deep budget cuts to the CSU. He has a deep desire to do what is best for students. Charlie’s management of the institution is something to behold, and on behalf of the board, I would like to thank him for his unending energy and dedication to the CSU.”

In 2004, Reed led the CSU in creating the pioneering Early Assessment Program (EAP), in collaboration with the California Department of Education and the State Board of Education, to assess 11th grade student readiness for college-level English and mathematics. Today, more than 385,000 students participate in the EAP — representing 81 percent of all juniors enrolled in public high schools in the state.

In addition, more than three million copies of the CSU’s innovative “How to Get to College” poster have been distributed in eight different languages during the chancellor’s tenure, and many states have instituted similar posters in their outreach efforts. CSU also launched its graduation initiative with the goal of increasing graduation rates for all CSU students by 6 percent, and closing the achievement gap that exists between student groups from diverse backgrounds.

“California owes a deep debt of gratitude to Chancellor Reed,” said University of California President Mark Yudof. “For close to 15 years, he has provided the vital California State University system with consistently dynamic and innovative leadership. Chancellor Reed’s legacy of public service includes his tireless, multi-dimensional campaign to reach students who might otherwise not have put themselves on a path toward college, in the process greatly expanding access to Californians of all backgrounds. The Chancellor has been an effective and reliable ally in the fight to keep alive for future generations of Californians the promise of an affordable, top quality education.”

In collaboration with former state senator and current California Community Colleges Chancellor Jack Scott, Reed worked to pass two of the most significant changes to the CSU since the formation of the system in 1960. In 2005, the CSU was granted the statutory authority to grant the independent doctor of education degree in educational leadership. Reed also worked with Scott to pass a new California law (in October 2010) that establishes an Associate Degree for Transfer for those students who have completed 60 transferrable units. The transfer degree will save millions of dollars and will also allow the CSU and the community colleges to serve up to 54,000 additional students.

“Charlie Reed is an outstanding leader in American higher education,” Scott said. “It was a great privilege to work with him on many educational projects. He was key in initiating and supporting the passage of SB 724, a bill I authored to grant CSU the authority to award the Doctorate in Education. He and I collaborated closely on the creation of an improved transfer system between the California Community Colleges and California State University. He has left an indelible imprint upon CSU. I wish him and his wife Cathy the very best in their well-deserved retirement.”

It is expected that Chancellor Reed will stay on until a replacement is named by the CSU Board of Trustees. He and his wife will return to Florida to spend more time with family, and he will continue to pursue higher education related projects.