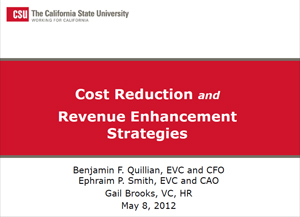 Governor Jerry Brown’s recently released May Revise added $50 million to the current $200 million potential trigger cut to the CSU. If the governor’s tax initiative fails in November, the CSU will be hit with a $250 million cut, which roughly translates to $11.75 million for Cal Poly Pomona.

On Wednesday, May 23, the CSU’s System Budget Advisory Committee meeting will discuss strategies for cost reduction and revenue enhancement. The meeting will be live-streamed on campus from 10:30 a.m. to noon in Ursa Major, Bronco Student Center. The Cost Reduction and Revenue Enhancement Strategies document is available at https://bit.ly/KV1bJm.

Faculty and staff are encouraged to attend the webcast and provide live feedback to the committee members. Input from the entire CSU community is needed on the strategies, as well as suggestions for assisting in reducing costs or increasing revenue.

“We look forward to having you join in the conversation as strategies are developed to maintain the quality and integrity of this university system until state support for higher education is stabilized, restored, and expanded to address the workforce demand and economic prosperity of California,” said Benjamin Quillian, CSU executive vice chancellor and chief financial officer.

At the webcast in Ursa Major, members of the campus community will be able to write down their questions, which will then be posted onto the webcast discussion page.

The Budget Advisory Committee dates back to at least 1980. It was created as a broadly representative systemwide advisory committee to counsel the Chancellor and his executive administrative staff.