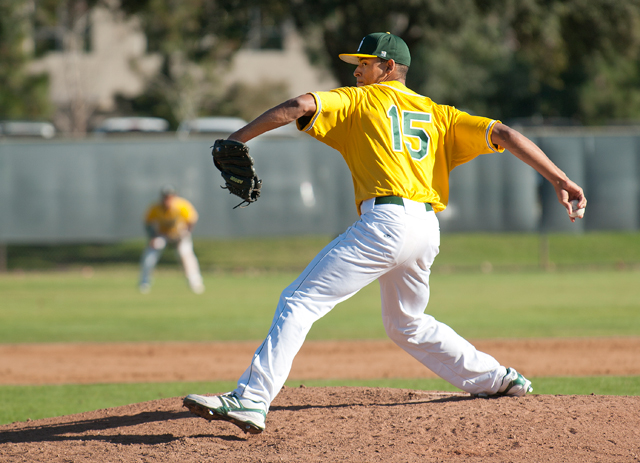 After leading the nation in wins for the majority of the 2012 season, Broussard now represents the 27th baseball student-athlete in Broncos’ program history to receive the All-American recognition. Through the history of CPP athletics, 395 Broncos have achieved that elite status.

“We’re extremely proud of what Geoff accomplished here at Cal Poly Pomona,” Broncos’ head coach Randy Betten said. “Geoff worked very hard to get to where he’s at and he played a huge part in the program’s success. When he was on the mound, we knew we had a great shot at winning.”

Earlier this month, Broussard earned the title of West Region Pitcher of the Year on two different occasions. Friday’s Daktronics All-America announcement came after a vote of the region’s sports information directors. The two other award outlets – American Baseball Coaches Association (ABCA)/Rawlings and National Collegiate Baseball Writers Association (NCBWA) – are expected to release their D-II All-America teams within the next few days.

Through his senior campaign in 2012, Broussard maintained an earned run average of 1.58 through 2012 while collecting 82 strikeouts in 97 innings thrown. A two-time California Collegiate Athletic Association (CCAA) Pitcher of the Week this year, Broussard recorded seven complete games and two shutouts in his 12 starts. In Friday’s All-America announcement, he proved to be the only CCAA player to be featured among the First Team selections.

Now that his collegiate baseball career has concluded, Broussard can now look forward to the 2012 Major League Baseball Amateur Draft. The three-day event will start on June 4 at 4 p.m. PDT. Travis Taijeron, a teammate of Broussard in 2010 and 2011, was picked by the New York Mets in last year’s draft and continues to play well for the Savannah Sand Gnats of the South Atlantic League.