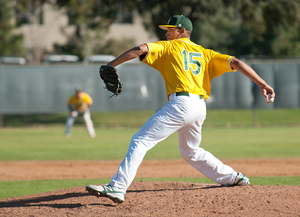 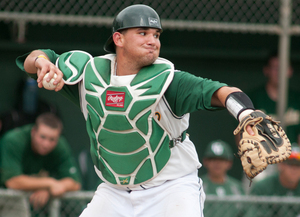 Broussard continues to rank first nationally in wins with 11 and on Monday, he was announced a semifinalist for the 2012 Tino Martinez Award, which honors the most outstanding player at the Division II level. This is the first appearance for Broussard in the All-CCAA selections. The Rancho Cucamonga native owns an earned run average of 1.58 while collecting 82 strikeouts in 97 innings thrown this season. A two-time CCAA Pitcher of the Week this year, Broussard recorded seven complete games and two shutouts in his 12 starts.

Torres has become a regular in the CCAA awards announcement, having been a Second Team honoree as a freshman in 2009 and a First Team selection in each year since. Through 2012, he led the Broncos in homeruns (8), on-base percentage (.431) and slugging percentage (.503). He excelled defensively behind the plate as well, tallying a fielding mark of .992. With eight homers this year, he pushed his career total to 34 to become the program’s all-time leader. 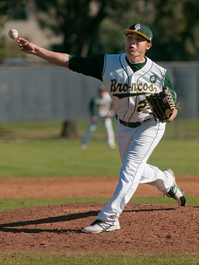 Hailing from Whittier, Ruvalcaba elevated his game this year after being an All-CCAA Honorable Mention selection in 2011. He went undefeated in 2012 with a record of 7-0, ranking third in the CCAA for wins. Ruvalcaba has also thrown the second-most innings among conference pitchers with 94. Through that workload, he’s maintained an earned run average of 2.49 while holding opposing hitters to a .229 average.

Miller proved to be a clutch hitter for CPP this year as he delivered 44 runs batted in, the second-highest total in the CCAA. He also shined defensively, tallying a fielding percentage of .995 through 2012 while picking up only two errors. Miller contributed key hits time and time again, with the most prominent being an extra-inning homer on March 10.

After transferring from Santa Rosa Junior College, Walter proved to be a tremendous addition to the Broncos’ roster this season as one of the most consistent contributors on offense and defense. The Lafayette native led the regulars in batting average (.345) while knocking a team-high 15 doubles and collecting a team-best 13 stolen bases in 13 attempts.