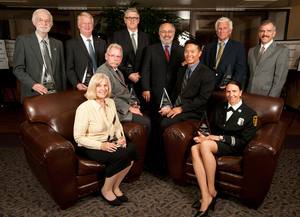 Representing each college in the university and athletics, the 2012 recipients were celebrated at the Distinguished Alumni Awards banquet on April 27.

Richard Wilson, ’75, ornamental horticulture
Wilson founded the enormously successful Colorama Wholesale Nursery with a main office in Azusa and growing areas in the Coachella Valley and Carpinteria. In 2008, he bought Piru-based La Verne Nursery Inc., which supplies most of the fruit trees to major nurseries in the southwest region. Wilson is a member of the advisory board of the plant science department, president of the Los Angeles chapter of the California Association of Nurserymen and member of the Nursery Growers Association of Southern California.

Bob Kallenbaugh, ’74, civil engineering
Kallenbaugh heads Irvine-based RBF Consulting, one of the most respected firms in the country for civil engineering, planning, surveying and related services. The firm has 17 offices in the Western United States and more than 500 employees. Over the years, RBF provides senior project opportunities for students, is the major corporate sponsor for the new Sustainable Land Development Computer Lab, and, in 2009, provided the civil engineering department’s first faculty fellowship.

Tamara Chick, ’95, biomedical kinesiology
Chick never imagined herself as a firefighter — or a role model for that matter — but that has been her career path. She was the first Women’s Recruitment supervisor and is currently the sixth-highest-ranking female on the Los Angeles City Fire Department. At Cal Poly Pomona, Chick played basketball and volleyball. She was two classes short of earning her degree in 1992 when she accepted the LAFD firefighter job. After fire academy and the one-year probationary period, she returned to Cal Poly Pomona to complete her coursework and participate in commencement.

Vic Tanon, ’94, finance, real estate and law
Tanon founded Emplicity, a Professional Employer Organization that provides off-site human resources services for about 6,000 employees in 30 states. The company offers turn-key solutions in human resources, payroll, benefits administration and compliance. In 2010, Tanon was named in OC Metro magazine’s “40 Under 40” list of movers and shakers, and Inc. Magazine recently identified Emplicity as one of the Fastest Growing Private Companies in America for the fourth consecutive year.

Stephen W. Harper, ’78, economics
As president of New Horizon Real Estate Group LLC, which is engaged in property investment and development in China, Harper is responsible for the company’s strategic direction, day-to-day management and the final success of its projects. Previously, he was the senior in-country executive of AMRESCO Japan, a subsidiary of the global real estate and financial services firm Lend Lease. In addition, Harper served as senior vice president of the Los Angeles County Economic Development Corp and president and CEO of the World Trade Center Association Los Angeles — Long Beach.

W. Frank Brandt, ’67, landscape architecture
More than four decades after starting a landscape architecture and land planning firm in his living room in Maui, Brandt has seen his vision grow into a multi-office corporation that has earned multiple awards. PBR Hawaii has undertaken thousands of projects and employs about 50 landscape architects, land planners and associated support staff in its Hawaii offices, with annual revenues exceeding $6 million. Brandt is chairman emeritus of PBR Hawaii and has been recognized numerous times for his professional commitment to maintaining a sense of heritage and integrity in his work.

Shirley Resich, ’68, social science, ’69 elementary teaching credential
Resich has been a classroom teacher, led several innovative fronts, and has aided students as a speech therapist. She is director of Pupil Services and Early Childhood Education for the Palos Verdes Peninsula Unified School District, as well as a highly sought-after speaker and consultant, particularly in early childhood education. She has also provided expertise to the Cal Poly Pomona Children’s Center, offered educational insights to students in the credential program, and served as Professor for a Day in 2011.

John Flaig, ’69, mathematics
Flaig is managing director of Applied Technology, a consulting, training and software publishing company. He has lectured around the globe, with special interests in statistical process control, process capability analysis, supplier management, design of experiments and process optimization. He is also vice president of professional services for ActiveMiner, the first automated performance improvement solution dedicated to the contact center industry.

Bill Doak, ’82, hotel and restaurant management
Doak is first vice president of hospitality at CIM Group, a full-service urban real estate and investment firm with more than $9.5 billion in assets. Doak has been heavily involved with the Santa Monica Convention and Visitors Bureau. During his tenure on the board, Santa Monica received more than 50 awards, including National Geographic’s “Top 10 Beach Cities in the World.” In 2010, Loews Hotels named Doak Managing Director of the Year, an honor he considers among his greatest achievements.