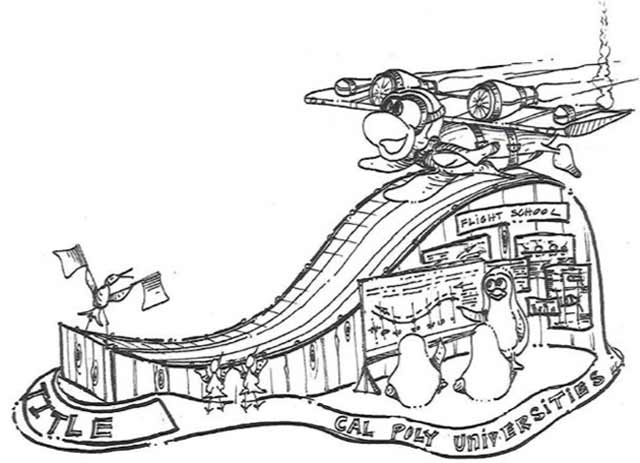 Flying penguins — at least penguins attempting to fly — will be the concept of the Cal Poly Universities’ float in the 2013 Rose Parade.

“We wanted a main focal image that was cute, fun and creative,” says Jackie Sorensen, design chair for the Rose Float Committee. “Penguins come across as cute and adorable. This will be the third float in our history with penguins.”

The winning concept sketch features a long runway with a penguin wearing aviator goggles, strapped to a set of aircraft wings and preparing for takeoff. At one side, a few penguins are getting a lesson on the principles of flight. Submitted by a San Luis Obispo student, the idea was chosen from 128 entries in the campus’ annual concept contest.

“Penguins Take Flight” will be the 65th collaborative entry by Cal Poly Pomona and Cal Poly San Luis Obispo, a tradition that started in 1949. Students are hoping the humorous scene and cute animals will be an instant hit with parade audiences and judges, garnering another trophy for the universities. In 2011, Galactic Expedition won the Fantasy Trophy and Viewer’s Choice Award, and Jungle Cuts received the Humor Trophy and the Viewer’s Choice Award in 2010.

“You have 10 seconds. Within 10 seconds the audience has to understand and get your float. That’s part of what makes an award-winning float,” says Rose Float Committee Chair Brian Hensley. “The story of making penguins learn how to fly fits really well with the tournament theme, which is ‘Oh, the places you’ll go.'”

Next, rose floaters from both campuses will come together to finalize the design, proportions, decorations and construction process, as well as produce a full-color rendering in early May. Construction will take place on both campuses through mid-October, when half of the float travels from San Luis Obispo to Pomona.

From early- to mid-December, it’s crunch time at the Rose Float lab. During Design Week, which begins as soon as finals end, students work tirelessly to finish construction, plastering, painting and character building. The float also must pass tests by Tournament of Roses officials to prove that it can safely travel the 5 ½-mile parade route.

During Deco Week, between Christmas and New Year’s Day, thousands of students and volunteers prepare the float for its worldwide debut, covering it with flowers, seeds, grass and other natural materials.

To learn more about the Rose Float program or to get involved, visit www.rosefloat.org or contact Rose Float advisor Greg Lehr at grlehr@cpp.edu.