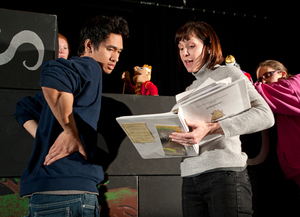 One moment, she drapes herself on a chaise, singing about being a demure princess. Next, two actors lift her up by the arms and carry her to center stage. In another scene she plays an overbearing queen, determined to distract her son from marriage.

As guest director of the music department’s “Once Upon a Mattress,” Egan teaches by example, demonstrating every role, dancing every step and singing from every song. The cast of 19 students watch closely and interpret her actions for their characters.

“Do you want me to do this?” asks Cara Borchardt, dramatically flinging her arms open as Princess Winnifred in the “Shy” number.

Performances are at 8 p.m. on May 10, 11 and 12 in the Music Recital Hall. Tickets are $15 for general admission and $10 for student admission. Buy tickets online at https://csupomona.tix.com or at the Music Box Office in Building 24, room 188.

In the musical comedy, which is based on the fairy tale “The Princess and the Pea,” Queen Aggravain has decreed that no one in the kingdom may marry until her son, Prince Dauntless, marries. However, she sabotages every eligible princess, until Winnifred comes along. 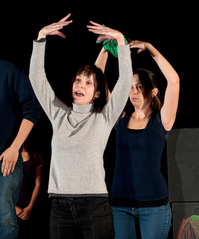 Egan says it’s refreshing to work with college students, especially from a smaller program. The accelerated schedule of only seven weeks of stage rehearsals means that students must learn on the go — and fast.

“Their enthusiasm is infectious. It’s not like a job. They have so much passion and energy,” Egan says. “Cal Poly Pomona has a nice small program. All professors know the students very well and know their strengths.”

Music major Mikella Anson, who plays Aggravain, says the pace of rehearsals is very fast and that Egan regards the actors as professionals.

“Professor Egan is five steps ahead of everybody else in the cast — a good thing since she is the director and needs to be that far — and is really struggling to pull all the rest of us along,” Anson says. “We simply aren’t used to the pace that she is using. Soon though, we will be picking up speed.”

Egan, who has previously performed and taught master classes on campus, was asked to direct the annual spring show after longtime professor and musical director Susan Burns retired. Egan brings a unique vision and a wealth of knowledge from her many years in television, movies and Broadway — including being the first to play Belle in stage production of “Beauty and the Beast.” 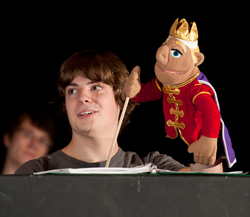 “She has the most amazing variety of expressions,” Noll says. “If you just watch her eyes, she’ll go through 100 expressions in 10 minutes. They’re very specific and very identifiable.”

Music major Scott Robinson agrees that Egan’s acting experience has been most valuable.

“Instead of pointing and herding people from one scene to another, she takes the time to really break down the characters, their intentions and motivations, and why they lead them to act the way they do,” says Robinson, who plays Dauntless. “She seems to always know exactly what emotional level to hit. She balances the subtle with the exaggerated in a way that is both highly entertaining and relatable.