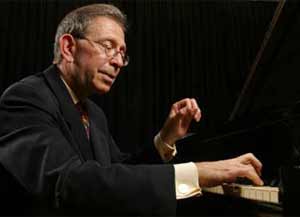 Jerome Lowenthal, concert pianist and professor at the Juilliard School of Music, will give a free master class at noon and perform in an evening concert on Monday, April 30.

The concert, with Cal Poly Pomona Professor Nadia Shpachenko, will feature solo and duet works by Fauré, Debussy and Liszt and is part of the music department’s Shpachenko & Friends Chamber Music Festival series. The pair will also perform this program at the Los Angeles County Museum of Art’s “Sundays Live” on April 29.

“I am immensely excited to welcome the esteemed Juilliard professor and world-renowned concert pianist Jerome Lowenthal to the Cal Poly Pomona music department,” Shpachenko says. “Twelve years ago I had the pleasure of studying with Mr. Lowenthal at the Music Academy of the West and I am thrilled and honored to perform exquisite miniature sets for piano four hands by Fauré (Dolly Suite) and Debussy (Petite Suite) together with Mr. Lowenthal both at Cal Poly Pomona and at LACMA.”

The free master class is at noon in the Music Recital Hall.

Lowenthal studied in his native Philadelphia with Olga Samaroff-Stokowski, in New York with William Kapell and Edward Steuermann, and in Paris with Alfred Cortot, meanwhile traveling annually to Los Angeles for coaching with Arthur Rubinstein. After winning prizes in three international competitions (Bolzano, Darmstadt, and Brussels), he moved to Jerusalem where, for three years, he played, taught and lectured.

Returning to America, he made his debut with the New York Philharmonic playing Bartok’s Concerto No. 2 in 1963. Since then, he has performed more-or-less everywhere, from the Aleutians to Zagreb.

Teaching, too, has been an important part of Lowenthal’s musical life for 18 years at the Juilliard School and 39 summers at the Music Academy of the West.