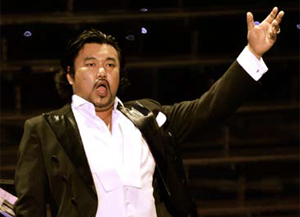 [This event has been cancelled due to illness.]

Korean dramatic tenor Kim Jun Man will sing opera arias, Italian and Spanish songs, and from “Phantom of the Opera” at a performance on Wednesday, April 11 at 8 p.m. in the Music Recital Hall.

Man has performed in many opera houses and gala and solo performances in Europe, Asia and Australia. His repertoire includes numerous opera arias and more than 1,000 Italian Canzones, Spanish songs, Latin American tunes, and jazz and pop. Man studied at the Santa Cecilia Music Academy, one of the best-known conservatories in Italy, and at the Aidem Academy in Rome.

As a Bel Canto and theatrical tenor, Man has made a specialty of Verdi and Puccini. The Bel Canto style, an Italian vocal style of the 18th and early 19th centuries, emphasizes evenness of tone, the use of a light tone in the higher registers, and execution of highly ornate passages with ease.

Man is the founder and director of a 30-member Korean Women’s Choir. He also enjoys giving voice training to Korean and Thai vocalists who love to sing opera.

Concert tickets are $15 for general admission, $10 for student admission, and free for Cal Poly Pomona music students. Tickets are available online at http://csupomona.tix.com or at the Music Recital Hall Box Office in Building 24, 188.