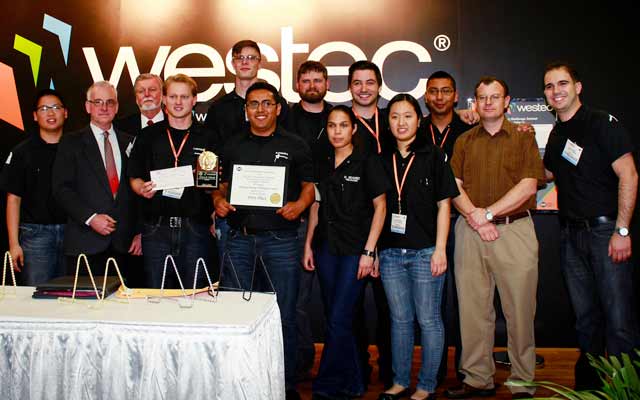 The Associated Manufacturing Societies student club from the industrial and manufacturing engineering (IME) department won first prize in their division and the Leadership Award at the 26th Annual WESTEC Manufacturing Challenge on March 27. The Society of Manufacturing Engineers sponsored the bi-annual competition, which was held at the Los Angeles Convention Center.

The 12-student team, led by captain Lance Ideker, built a 3-D printer. The final project was on display and judged by several industry professionals. Though Cal Poly Pomona has won several awards in the WESTEC and AeroDef competitions, the last time a student team won first place in their division was 2001.

IME Professor Dixon Davis helped prepare the team for the competition, providing valuable input. Davis has experience in the manufacturing engineering industry and judged the WESTEC competition prior to joining the faculty at Cal Poly Pomona. In addition to the final project, students gave a 10-minute demonstration and answered questions for 10 minutes.