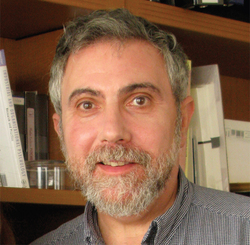 “The Crisis: Year Five” is sponsored by the economics department and by Krugman’s textbook publisher, Worth Publishers, to celebrate the publication of the third edition of his text “Microeconomics,” which he wrote with his wife, Robin Wells.

The event is free and open to the public. A Q&A session will follow his presentation.

“It’s a thrill to have Paul Krugman speak to our community,” says Lynda Rush, chair of the economics department. “He has the rare ability to make complex economic issues understandable to the layman while commanding the respect of academic economists based on his significant contribution to our discipline.”

Krugman, a professor of economics and international affairs at Princeton, specializes in international trade and finance. He is one of the founders of the “new trade theory,” a major rethinking of globalization and the ways in which regions establish dominance in particular sectors of the economy.

“Very small, almost accidental advantages get built into larger advantages that then persist over time,” he said in an interview with Charlie Rose in 2008, citing Dalton, Ga. as an example. The city became the capital of carpet production in the United States near the end of the 19th century because a teenage girl there made a tufted bedspread as a wedding gift “and then one thing led to another.”

Krugman, who joined the New York Times in 1999 as a columnist, often analyzes the intersection of politics and economics, and he pulls no punches. A self-identified liberal who regularly takes on the right, he also does not shy away from challenging Democrats. Some of his most pointed criticism has been directed at President Obama for his handling of the economic stimulus.

Krugman is also the author or editor of 20 books and more than 200 papers in professional journals and edited volumes, as well as a regular guest on television news shows.