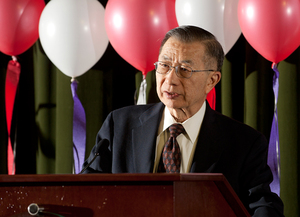 President Emeritus Bob Suzuki concluded his keynote speech at the Unity Luncheon with a reminder that the university has made notable strides to achieve cultural diversity and unity, but the effort remains a work in progress.

Suzuki, in his first formal appearance on campus since his retirement in 2003, received a warm welcome at the luncheon on April 12. He lauded Cal Poly Pomona for instituting programs and policies to promote diversity in ways that are inclusive, and he cited the university as a national leader in such efforts.

“Cal Poly Pomona’s institutional identity as a university that values both diversity and unity … means that we respect differences among people and don’t stereotype people based on their race, ethnicity, gender, sexual orientation or disability.”

The Unity Luncheon, established early in Suzuki’s presidency, marked its 20th anniversary with an array of entertainment, recognition of “diversity champions” on campus, and a buffet luncheon from Panda Express. The theme for the event, hosted by the Asian Pacific Faculty, Staff & Student Association, was “Framing Your Identity,” highlighting the fact that people cannot be compartmentalized into specific, stereotypical categories.

A reenactment of scenes from the play “FOB,” which addresses Asian stereotypes, succinctly made the point. In the first scene, an actor described, in sometimes harsh terms, the ways some Asians are perceived, with images flashing on a screen to buttress the point. In the second scene, the actor repeated many of the same terms, but the images were dramatically different, highlighting the ignorance and fallacy of stereotyping. 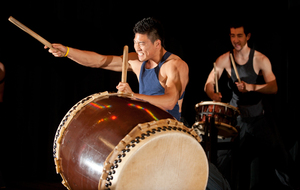 The luncheon concluded with the presentation of certificates to this year’s diversity champions, which included staff members and students, with each affinity group presenting certificates of merit. They are: