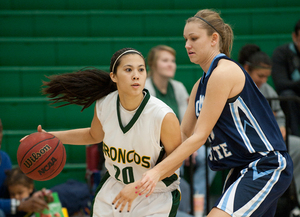 Having collected 19 wins from November to February while building a stellar 2011-12 resume, the women’s basketball team will now get to play in the most important part of the year: the month of March.

The Broncos are seeded No. 6 in the West Region of the NCAA Division II Championships. CPP will challenge No. 3 Grand Canyon on Friday, March 9 at host site UC San Diego.

For live audio streaming of the game, visit Bronco Athletics.

The same two teams met in the 2011 West Region title game, with the Broncos capturing a hard-fought win to advance to the Elite Eight.

“Grand Canyon is certainly a tough team once again this year,” CPP head coach Danelle Bishop said. “Any team is beatable and any team can get hot. It’s March. They lost a key player from last year and we lost a key player. We’re just going to get out there and play hard and play the best we can.”

The Broncos will be looking to add another memorable chapter to the program’s storied history, which includes five national titles and 48 victories in the NCAA Tournament. This will mark CPP’s 23rd NCAA postseason appearance since the program started in 1974.

“We’re excited to still be playing at this point in the season because a lot of teams out there are not,” Bishop said. “It’s an honor to be in the tournament.”