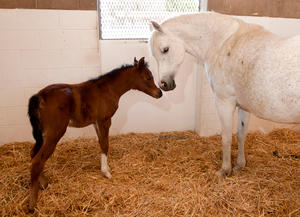 It’s foal season at Cal Poly Pomona’s W.K. Kellogg Arabian Horse Center. So far this spring, six fillies and one colt have come into the world, and five more babies are on their way.

Helping the mares through pregnancy and introducing the new foals to the world is a devoted group of about 90 students in the Foal Watch program. Split into teams, students care for the mares, take them on walks and stay overnight for the birth.

The best part of Foal Watch, says animal science student Cileah Kretsch, is watching her foal grow and develop. She and three team members care for CP Spellbound, who gave birth to filly Circe on Feb. 18.

“Seeing [Circe] grow up, I feel like she’s a part of all of us because it’s something we’ll always have on campus that we helped with, like choosing her name, taking care of her, being there,” Kretsch says. “She used to freak out whenever we would go in the stall because she didn’t know what we were or who we were. But now as we come in more, she’ll come up to us and play with us. It’s nice to see her get used to people.”

Foal Watch students also have the privilege of choosing the foal’s barn name, or nickname. Katie Lucot, an animal science senior, says her team wanted to stay within the witch tradition as they brainstormed names for Spellbound’s foal.

The group agreed on Circe (pronounced SIR-see), a witch and minor goddess in Greek mythology who transformed Odysseus’ men into pigs.

This year’s foals include:

March 12: Colt Maximus from Ever After NA and True Mist

To stay updated on the W.K. Kellogg Arabian Horse Center, visit the Facebook page at www.facebook.com/pages/WK-Kellogg-Arabian-Horse-Center/83685533213.