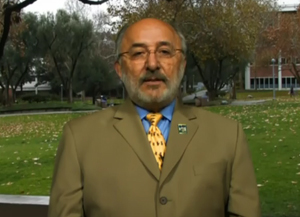 President Ortiz recaps a special session of the CSU Executive Council last week, which focused on ways to address the next potential budget cut. If Gov. Jerry Brown’s tax initiative fails to pass in November, the CSU budget will be cut an additional $200 million, about $9.6 million for Cal Poly Pomona.

“But let me also be very clear. This does not mean we are surrendering. We are not rolling over and assuming that we can¿t stop the cuts,” Ortiz says. He encourages people to contact their state representatives, and for more information about getting involved, the campus community is encouraged to email president@cpp.edu.

In the video message, the president congratulates the women’s basketball team for another terrific season. They played in their 23rd NCAA Division II Tournament last week and competed all the way to the final buzzer.

The message closes with a video profile developed by MediaVision on Professor Nadia Shpachenko in the Department of Music.