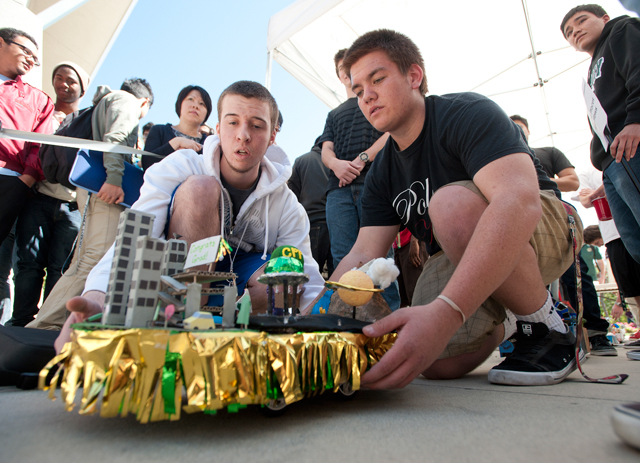 Miniature rose floats created by freshman engineers inched their way down the parade route, between buildings 9 and 17, during the fourth annual Mini Rose Float Competition on March 8.

The intricately designed and creatively engineered floats followed the 2013 Rose Parade theme of Dr. Seuss¿s ¿Oh, the Places You Will Go!¿ A Southern California-themed float featured a surfer on one end and a snowboarder on the other. An entry about Narnia had a large wardrobe, a lion and a dragon.

The assignment ¿ part of the Engineering, Society, and You course (EGR 100) ¿ required students to build a float that would travel down a 40-foot route, pass over a miniature speed bump and go under a bridge without any assistance. Teams competed for the ultimate prize: exemption from the final exam.

Students worked in groups of about 20 and had to complete the project in three weeks. For some, this was no small challenge.

¿It¿s hard to make sure college students put in the amount of time that they need to for the project,¿ says Matt Downs, team leader for the float “Adventure Is Out There.” ¿It¿s a one-unit class, so people tend to think that other classes are more important.¿

Downs¿ team members collectively made their mini rose float a priority. ¿Adventure Is Out There¿ featured a replica of Big Ben with a ticking clock, Stonehenge with an alien orbit, and a Las Vegas sign that moved up and down.

Christian Gallardo¿s group, which built ¿Floating on a Dream,¿ divided the project into sections based on each member¿s strengths.

¿Even though I am a computer engineer, I found this project worthwhile because I was able to learn new skills, such as working with the gears and soldering the medal,¿ Gallardo says. ¿I also gained leadership skills by being the CEO of the team.¿