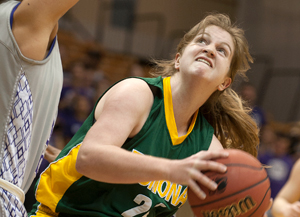 Ford, a senior center from Newhall, Calif., led the Broncos to a 19-9 record and the program’s 23rd appearance in the NCAA Tournament. She collected double-double performances in nearly half of CPP’s games and her double-double total of 13 ranked 19th nationally.

Among California Collegiate Athletic Association (CCAA) players, Ford held the fourth-best scoring average at 14.6 points per game and the second-best rebounding average at 9.3 boards per game.

On Dec. 30 at UC San Diego, Ford tallied the 14th double-double for her career, finishing with 20 points, 12 rebounds, two assists and a steal. A first-half layup marked Ford’s sixth point of the game and the 1,000th of her career. Through her time as a Bronco, Ford totaled 1,292 points and 792 rebounds.

Aside from her success on the court, Ford has also excelled in the classroom as an Academic All-District honoree while working toward a degree in Food Marketing and Agribusiness Management.

This marks the 32nd time in program history that a Broncos’ women’s basketball student-athlete has received the All-American recognition. Joining Ford to help CPP reach the Elite Eight in 2011, Reyana Colson picked up the national award at the conclusion of last season.