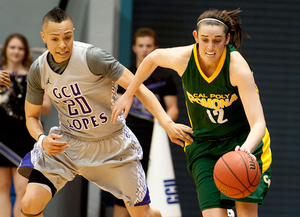 A second-half rally fell short for the women’s basketball team Friday against Grand Canyon, as the Broncos suffered a season-ending 49-48 loss in the first round of the NCAA Tournament.

CPP finishes the 2011-12 campaign with a 19-9 record while GCU improves to 24-3 and will play a second-round game Saturday at 5 p.m. The West Region stage of the tournament is hosted on the campus of top-seeded UC San Diego.

In the last game of her prolific Broncos’ career, Megan Ford totaled 17 points and seven rebounds while going 7-for-10 at the free throw line. J.J. Judge joined Ford in double figures with 14 points on 5-for-10 shooting from the field. Senior guard Rosslyn Beard led the CPP defensive effort as she totaled four steals while collecting four assists on the offensive end.