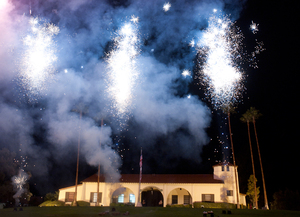 Cal Poly Pomona reached a historic milestone on March 28 when it surpassed $100 million in donations and pledges just 18 months into the public phase of its ambitious comprehensive fundraising campaign.

“To generate this level of support in this economic environment is truly amazing,” said university President Michael Ortiz. “It speaks to our well-deserved reputation as a place of academic excellence, as well as to the passion of our friends and alumni who believe in our mission to educate tomorrow’s leaders.”

The Campaign for Cal Poly Pomona was publicly launched in the summer of 2010 with a goal of raising $150 million over the life of the campaign. This undertaking has laid out four goals: to strengthen the university’s ability to provide hands-on learning opportunities, to prepare students for the changing demands of workplace, to increase research and scholarship opportunities, and to ensure that a quality college education remains within reach for underrepresented communities.

“This is a day when we can pause to reflect on what has been accomplished,” said Scott Warrington, the vice president of university advancement. “We realize, of course, that the journey continues, but it certainly is heartening to step back and see how this campaign has changed not only the university, but its community of supporters.”

The campaign’s success rests in the actions of longtime benefactors and new supporters, in gifts large and small, Warrington said.

“We have more than 5,000 donors who were inspired to give for the first time. Many of them are alumni who told us that they wanted to show their appreciation for what their Cal Poly Pomona education has done for them.”

A major catalyst within the campaign has been a $42 million gift from the W.K. Kellogg Foundation — a record cash donation to a California State University.

“Mr. Kellogg was a strong believer in higher education, and his vision of ‘investing in people’ has translated into the foundation’s fundamental belief that access to a high-quality education is vital to enhancing the lives of vulnerable youth,” Sterling Speirn, president and CEO of the Kellogg Foundation, said at the time of the gift announcement. 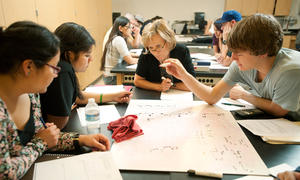 The university’s endowment will surpass $100 million by the conclusion of the campaign, more than tripling its starting point.

Signs of the comprehensive campaign are evident throughout campus, starting with the recipients of more than $5 million in scholarships this past academic year alone. It is also visible at the John T. Lyle Center for Regenerative Studies, where two large solar panels donated by Amonix Inc. have made the 16-acre site carbon neutral. The Collins College of Hospitality Management, where a new master’s degree building is in the planning stages, and the nationally recognized cyber security program’s world-class virtual war room for intercollegiate competitions are other examples of the major impact donors and alumni have made on Cal Poly Pomona.

“We’ve also raised the intellectual capital of campus, bringing speakers and funding research,” Ortiz said. “This is a success story that will play out for many years to come.”

Warrington said the university is poised to achieve the campaign goal of $150 million.

“With the support we have received, you can feel the renewed energy on campus. We are confident our campus community, alumni and supporters will rally together to get the university across that finish line.”